Tuai Leit's Own (miniquest) is a part of the Tales of the Arc miniquest series.

Talk to Navigator Jemi at Tuai Leit, and select the Tuai Leit's Own miniquest. She tells you to speak with her old Sensei Hakase who you will find in the south-eastern corner of the learning centre near the berry planter on Tuai Leit.

She asks you to speak with Cheri, a gnome at their gnome colony on Tuai Leit, as rumberries have curative properties, and rum itself gives cognitive properties to zombies. On your way, if you haven't done so already, you should pick 30 rumberries. Talk to Cheri to give her the 30 rumberries for what she assumes to be her special rumberry punch, but you change it to an elixir. Give the concoction to Ekahi. 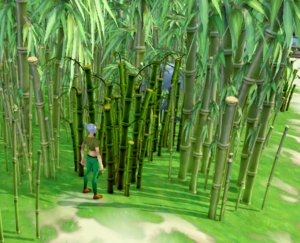 Clearing the way to the Moai

After giving the concoction to Ekahi return to the Sensei again who refers you to the Tuai Leit moai. Speak with the moai, also known as Sparkle, on the west coast hidden behind the inferior bamboo. You will need to cut the inferior bamboo to get to the moai. She helps you come to the conclusion that it is a spiritual affliction. Go to Aminishi, collect a few spirit dragon charms, and speak with Yulong in the Spirit Realm on the south coast. To get to the Spirit Realm click travel on the The Well of Spirits dragon statue near the middle of the island (by the sakadagami). Yulong wants 30 positive energy. Gather the positive energy either from Cyclosis or The Islands That Once Were Turtles and give him the energy, and speak to him again. Yulong will transfer the energy into you. As he is doing this bright flashes of light occur and screaming can be heard, to which Yulong says is a bad omen. Talk to Ekahi in the regular world and attempt to fix his chi. This fails again, leaving Ekahi energy hungry and worse than ever.

Go back to the Sensei on Tuai Leit. She tells you to speak with Sensei Seaworth who is located just to the west of her. He says that it must be a mystical issue, and Sojobo on Waiko is the one who can help you with this issue. Go to Waiko and speak with Sojobo in the trade hub. He tells you that Ekahi has been inflicted by a jiangshi, which is a kind of eastern vampyre. The only way to cure him is to kill him, or have the one who afflicted him willingly remove the affliction. Speak to Navigator Jemi to complete the miniquest. 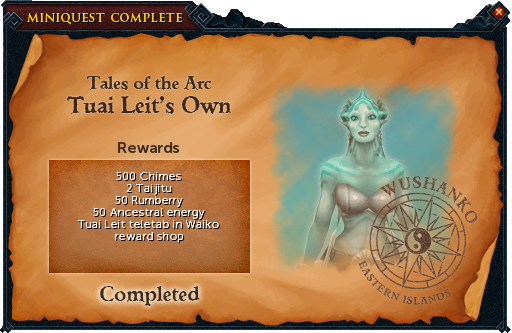 Tuai Leit's Own (miniquest) is directly required for the following quests/miniquests: