Tsunami is an ultimate Magic ability.

When activated, the player creates wave of water that damage all targets in the 3x4 area directly in front of the player for 200% to 300% weapon damage. Additionally, the player gains 10% adrenaline for each critical hit they perform in the next 30 seconds. Critical hits of Tsunami itself count for its effect and grant 10% adrenaline. The adrenaline buff is indicated by a

icon. The buff will only be granted if Tsunami deals damage.

Tsunami grants an additional 2% adrenaline if it deals damage to 2 or more targets.

Tsunami has the normal range of a magic ability, however the wave itself has a maximum range of 4, half of a normal magic spell or ability. The player character will not attempt to move closer to use the ability.

Tsunami's adrenaline buff is not magic-specific. Ranged and melee critical hits also generate bonus adrenaline if the player switches to weapons of those styles. Using Incendiary Shot or Meteor Strike, or recasting Tsunami itself where possible, for example during the Kerapac, the bound boss fight with the Time warp ability, refreshes the 30 second buff.

Glacial stacks, which are obtained from casting Incite Fear, a level 98 Ancient Magicks spell, decreases the adrenaline cost for Tsunami by 12% for each stack obtained. These stacks cap at 5, decreasing the cost by 60%, making Tsunami cost 40% adrenaline to use at max stacks. The Conservation of Energy relic power and ring of vigour still restore 10% adrenaline after using Tsunami, further decreasing the expended adrenaline. 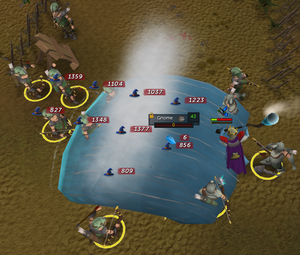 The area of Tsunami's effect.