Truffles were originally intended to be found using a Broav as part of the Summoning skill. However, the lack of time and use for the truffles caused the plan to be scrapped. The Broav was also not added in the initial release of Summoning, but was later added as a reward from While Guthix Sleeps while truffles were not. A pig familiar that hunted truffles was a reward considered for the Bringing Home the Bacon quest, however this dropped due to lack of a use for the truffles obtained.[1] 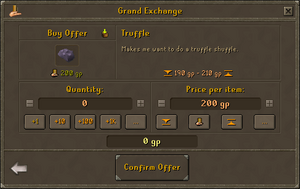 A Grand Exchange offer for a truffle