From the RuneScape Wiki, the wiki for all things RuneScape
Jump to navigation Jump to search
Trough? (edit)? (edit) 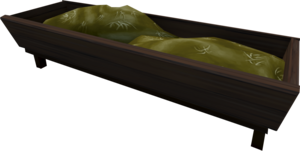 Troughs are found in each animal pen at the Manor Farm and the Anachronia Dinosaur Farm. They are used in the player-owned farm and Ranch Out of Time to feed the livestock in each pen. They can be filled with various organic resources to produce mush. The foods an animal will eat is listed under the animal's info, which can be seen by clicking on them in the pen or in the player's inventory. Each trough can hold up to 1,000 produce. Food can be added either noted or unnoted, and the trough can be used from both inside and outside the pen. Any amount from 1 - 1000 to be added in one action, though for non-stackable items the full amount can only be added if they are noted.

Each animal eats one food every hour[1] and the correct food will raise animal health and happiness by 5–9%. For example, a pen with 3 animals will require 3 food each hour to maintain. Foods can be taken out of the trough as mush in order to reuse with other paddocks, but the original items cannot be reclaimed. As all food sources result in the same amount of produce, cheaper sources are better. Animals with both Immune and Joyful traits will remain at 100% health and happiness without the need for food, although food will still be consumed if it is in the trough. Having both these traits can be useful for animals that require food that is expensive or time-consuming to acquire, such as zygomites or frogs.