From the RuneScape Wiki, the wiki for all things RuneScape
(Redirected from Trollweiss mountain)
Jump to: navigation, search
The Old School RuneScape Wiki also has an article on: osrsw:Trollweiss Mountain

Trollweiss Mountain is the huge snowy mountain in the Troll Country. It is used mainly in Troll Romance, and players must have a sled to travel over it. To reach it, players must travel through a series of tunnels and paths in the Troll Country filled with highly aggressive and dangerous Ice trolls, finally emerging on the very summit. On this peak the gnomish explorer Brambickle can be found. 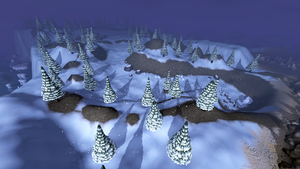 One of Trollweiss's valleys, viewed from the mountain's western rim.

Trollweiss Mountain is one of the largest mountains in RuneScape. It is covered year-round in a thick layer of ice and snow, and powerful winds constantly sweep across it. Because of its harsh environment, little can survive on it apart from ice wolves, large evergreen trees, and the endangered Trollweiss flower.

The mountain slopes steeply go down from north to south, making going back on foot impossible. To travel back to civilisation, players must have a sled in their inventory. Along the slope are several item respawns, such as sapphires, chaos runes, and extra sleds. Once the player has travelled across the entire mountain, they will arrive at a small area at the south end of the mountain. The only way out from that area is through a small troll-infested tunnel that leads to both Keldagrim and the Fremennik Province.

There are no settlements on Trollweiss Mountain, although trolls are known to visit it from time to time. Interestingly, the only settlement in the area is beneath the mountain itself. Directly underneath the mountain lies the underground dwarven metropolis of Keldagrim, which was founded thousands of years ago during the God Wars. Without the Trollweiss Mountain to shelter the dwarves, it is very possible that the dwarves would have been driven to extinction.

Much of the snow on Trollweiss Mountain has slowly been forced beneath the surface by falling into crevices. From there, it makes its way down very slowly until it reaches molten activity, causing it to melt. It then finds its way even farther down until it finally penetrates the ceiling of large underground caverns. From there it collects to form the River Kelda, which flows through Keldagrim. 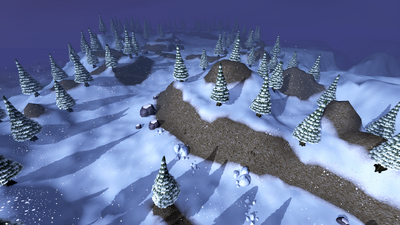 Trollweiss flowers are found in the valley of Trollweiss Mountain. 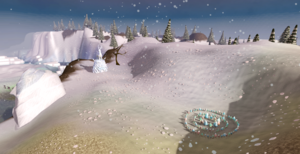 Trollweiss's western rim, an insurmountable border between the Troll Country and Fremennik Province.