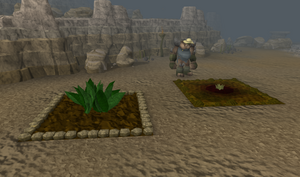 The Trollheim herb patch and its guardian, My Arm.

Once a player has completed My Arm's Big Adventure they are able to rely on My Arm to maintain the herb patch atop the windswept roof of the Troll Stronghold. This service is offered for free; My Arm, out of gratitude to the player for teaching him to farm, will prevent the herbs from becoming diseased, and as such introduces a risk-free, expense-free way for players to gain both Farming experience and money. Another bonus of using the Trollheim herb patch is the presence of the tool leprechaun Larry; he is the only leprechaun who will go above and beyond to assist the player, running his own Farming supplies store in case players forget to bring or run out of equipment. 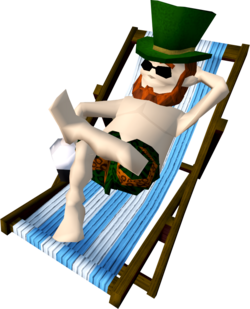 Larry the Leprechaun in his unique attire.

Making the most of the patch[edit | edit source]

To maximize the potential of the patch, players should acquire the scroll of life as a reward from Daemonheim. It costs 10,000 tokens and requires level 25 in both Farming and Dungeoneering. This reward returns a seed from harvesting a patch 10% of the time. Since one can expect an average of 6.8 herbs per seed, without any fails here, one can additionally expect an extra seed every ten plantings. It is also recommended, but not required, to use compost, supercompost, ultracompost, or fertile soil on the patch to increase the yield of herbs.

Profits for herbs tend to increase as the Farming level to require them does; however, herbs such as toadflax and avantoe prove an exception to this. The profits gained through planting herbs in this patch are detailed below.

*This chart calculates 6.8 herbs per seed times 10 seeds minus the cost of 10 seeds, finally adding the return of a recuperated seed. This may be formulated as Price of herb x 68 - Cost of seed x 9.

This information has been compiled as part of the update history project. Some updates may not be included - see here for how to help out!
Retrieved from ‘https://runescape.wiki/w/Trollheim_herb_patch?oldid=35685759’
Category:
Hidden category: