From the RuneScape Wiki, the wiki for all things RuneScape
(Redirected from Troll invasion)
Jump to: navigation, search
"TI" redirects here. For the island used to teach new players about RuneScape, see Tutorial Island.

Troll Invasion is a members-only single-player Distraction and Diversion. The trolls are making a push to invade Burthorpe, and the Imperial Guard are being overwhelmed and require assistance. The trolls can be stopped through either combat or skilling. 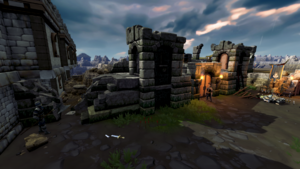 The gatehouse from afar

Speak to Captain Jute outside the newly constructed gatehouse north of the Warriors' Guild. He will offer you the choice of fighting the trolls or keeping the gatehouse repaired. Confirm that you've picked the one you want to do and you will start the D&D. You can start the game quickly by right-clicking and choosing either 'start-repairing' or 'start-fighting'. If you haven't yet done this D&D since the 1st of the current month, he will ask you if you're sure you've picked the right one as it resets the 1st of every month 0:00 UTC. 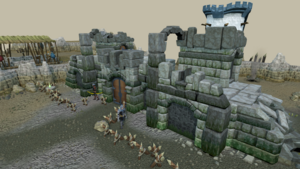 The combat version of Troll Invasion involves waves of increasingly stronger enemies attempting to overwhelm the player, similar to the TzHaar Fight Cave. All enemies must be defeated for the wave to be completed. There are two variations of the waves: easy, which has less enemies per wave but has 20 waves, and hard, which has more enemies per wave but only has seven waves. In order to unlock the hard version, the easy version must be successfully completed at least once. The option between the two difficulties will be offered when starting the D&D again.

This is a safe D&D and players will lose nothing other than used consumables. Good food such as monkfish is advised however. Super restore or restore potions are also advisable, in case Dynamite destroys the supply table. Also bring 2-4 prayer potions to maintain protection prayers, as lapses can be deadly. High levelled players can complete this without supplies though, especially if combining a twisted bird skull necklace or better with a bonecrusher to maintain Prayer.

The aim of the game is to kill all of the trolls in each progressive wave. In the final wave the player fights Cliff who uses the full combat triangle, attacking with melee, ranged, and magic, and a special attack or two thrown in as well. In the standard version Cliff appears in Wave 20, by himself. In the hard version, Cliff appears in Wave 7, along with several other trolls that must also be defeated. Cliff isn't extremely difficult to defeat, if the correct tactics are used. When fighting him, players are advised to keep their melee protection prayer turned on. When a huge magical rock appears, it is advised to switch to a magic protection prayer. The ranged attacks are harder to recognise, but target the area that the player was last standing in, and can be dodged by moving out of that area.

Players using Ice spells can help minimise damage taken by farcasting Cliff while keeping Protect from Magic on and dodging his ranged attacks. If he moves in to use a melee attack, the player is advised to run around until they are able to freeze him again.

Warning: Make sure you do not walk into the path to the north-west, otherwise you will be rapidly hit for 30-100 points of unblockable damage from unseen thrower trolls.

The map for Troll Invasion.

Do not bring a cannon: it cannot be set up within the area. 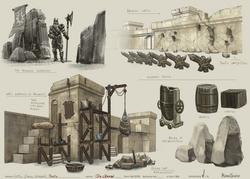 If skilling is chosen, the gatehouse must be maintained. The ballista must be tended to, the oil vats refilled, and the barricades repaired. These actions will increase the troops' morale, causing them to fight harder. If the trolls are stopped for ten minutes or if 1500 trolls are defeated, they will depart. 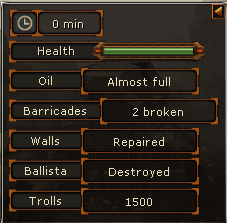 The interface showing the gatehouse's status in repair mode.

To keep the gatehouse in order, four things must be done. There is an interface on the top-left part of the screen, showing what needs attention, how many trolls have been killed, and how much time is left. With each action that is completed successfully, 10 trolls are killed.

For every 10 trolls that the soldiers kill, 5 morale points are gained. These are used on boosts, which each cost 75 points and have a duration and cool-down time of 30 seconds.

Every once in a while, the trolls will do their own special attacks which will harm the gatehouse. 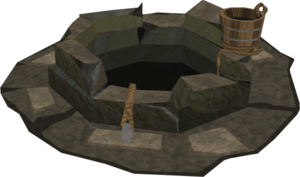 The first time you play each month you can claim a reward book from Captain Jute. The book gives experience in any one skill chosen by the player. Rewards can be claimed quickly by right-clicking the Captain and selecting 'Rewards'.

Players who choose to fight also receive normal combat experience while playing. Those who choose defence receive small amounts of experience in the skills they use to keep the gatehouse repaired (construction for repairing walls, crafting for repairing barricades, firemaking for lighting ammo).

Players get experience based on the level of the skill on which they choose to use the reward and based on the percentage of the D&D completed. Both hard and normal versions give the same experience when receiving the book.

The amount of experience received from the reward book is

is the level of the skill on which it is being used,

is the wave completed (or trolls killed in defending) and

On 2 April 2012 the Squeal of Fortune gained an update allowing players to receive a Spin Ticket every month they do the Troll Invasion D&D. Since the Squeal of Fortune was replaced by Treasure Hunter, you can now gain a key for it every time you play for rewards. Under normal circumstances, this is once per month; however, if you redeem a D&D token (troll invasion) or D&D token (monthly) to get an extra play, you will be rewarded key tokens for those times. 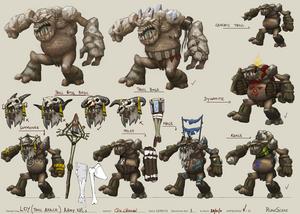