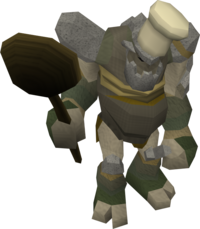 Troll cooks are trolls who specialise in cooking helpless humans into stews. They are always found near cauldrons in which they cook their victims.

Troll cooks are usually identified by their examine text of "Human is his speciality", as this is their primary role. However, all troll cooks are non-aggressive towards players by default, and will simply ignore them. Ash and Dung on Death Plateau become an exception to this rule during My Arm's Big Adventure.

There are several troll cooks in the troll stronghold kitchen. All are non-aggressive, and have no interaction options except examine.

The Troll cooks received a graphical update on the 15th of March 2011. With this update many of the cooks now carry Meat Cleavers.

There are a few more detailed troll cooks such as Burntmeat (who is the chief cook of the Troll Stronghold) and Ash and Dung on Death Plateau.

Ash and Dung maintain the cooking pot on Death Plateau and as a result boil down captives of the troll raids of Burthorpe into stews. The two chefs commonly argue with one another on the best methods for cooking humans to acquire the most tender and tasty meat, the methods featured in the argument include roasting and boiling and always result in the cooks getting angry with each other. During My Arm's Big Adventure the cooks will attack the player who searches the cooking pot, hoping that the player will be their next meal.

Burntmeat is the head troll cook in the Troll Stronghold. The player works for him in Eadgar's Ruse and My Arm's big adventure. Burntmeat is larger than any of the other troll cooks and enjoys Cooking Humans. Burntmeat is arguably the most important of the Troll cooks because he can be talked to at any point as well as being involved in several quests. The player must trick him in Eadgar's Ruse and help his assistant grow Goutweed in My Arm's Big adventure. Burntmeat likes to inform the player about humans he has cooked such as the Adventurer whose sweaty feet led to Burntmeat getting a stomach ache.

Lalli is a troll cook east of Rellekka and west of the Troll Stronghold. He is the only troll cook who does not prepare and eat humans. His examine text is "Distinctly troll-shaped" rather than the normal "Human is his speciality."