Stop Them In Their Tracks![edit | edit source]

Note: if you originally decide not to "play through it," you may still complete it. To do so, talk to the corresponding people. 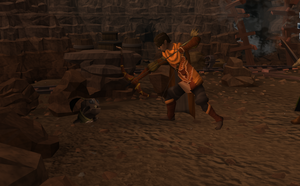 Ozan and the Troll Baby face off

A voiced cutscene lays out the trolls' opinion on humans and their ambition to wipe them out. This cutscene can be watched again by talking to Major Corothers next to the bank chest. Linza forges a sword and people go about their daily tasks as a wave of trolls flood down out of the mountains, under fire from Imperial Guard cannons. The surviving trolls flee into a cave. The player is shown approaching the cave with two Imperial Guardsmen, where Ozan, a third guard and Linza are waiting. As Linza hands you the sword she was forging, a troll attacks, killing two guards. You enter the cave with Ozan and the remaining guard, leaving Linza outside, where you find a level 12 Troll general. You kill the general, and hear crying when you talk to Ozan; a baby troll crawls out from behind the rocks, and Ozan chooses to spare it and take it outside.

Ozan tells you to go outside and speak to Captain Jute, who is by the Troll Invasion guardhouse. Jute reveals that the trolls are bypassing their defences using a tunnel from Death Plateau, and they can't collapse the Burthorpe end because it might bring down the castle with it. Jute wants you to fire the cannon on top of the roof to block the other end of the tunnel.

Use a rope ladder to reach the castle roof. Click on the middle-north cannon to fire it and block the tunnel. Then speak to Major Nigel Corothers, located south of the castle near the training circle, to tell him you've blocked the tunnel. He tells you that Burthorpe, which has been bearing the brunt of the attacks, and Taverley, which has been sending aid, are in bad shape, and he wants you to go around helping people where you can. 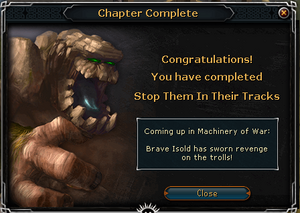 First talk to Corporal Keymans who is standing at the bank chest about the baby troll. Ozan has dumped the baby troll with him and he doesn't know what to do with it. He is the one that you can claim the baby troll pet from, if you want it.