The Imperial Guard raid was a failure, and Dunstan's son has been captured by the trolls!

Journey through Trollheim to the Troll Stronghold, and rescue him!

You do not actually have to complete the quest to access God Wars Dungeon, you just have to reach the point where you defeat Dad.

Speak to Commander Denulth in Burthorpe. Ask him about the ongoing battle between the Imperial Guard and the trolls. He will tell you that their plan of ambushing the trolls backfired; they were attacked and Dunstan's son, Godric, was kidnapped and taken to their stronghold.

If Denulth tells you that the ambush is still being planned, try asking him about the White Knights.

Tell him that you would like to help get Godric back. Head to Freda (west of the lodestone and past the Warrior's Guild) and buy a pair of climbing boots for 12 coins.

Enter Sabbot's cave, north-west of Troll Invasion, and pass through the cave:

Once you exit, put your climbing boots on and climb over the wall of rocks west of cave entrance you came from. Alternatively, it is faster to run through the Death Plateau on the surface, but low level players may want to bring more food as they will be attacked by Thrower Trolls. Head east and work your way through the obstacles leading to the Troll arena. 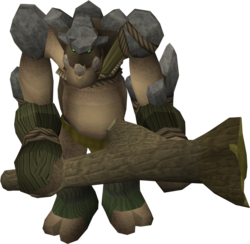 A large troll named Dad waits in the arena. He does not allow anybody to pass unless they defeat him first.

He is level 77 and uses a giant log as a weapon. He can hit up to 440 and send players flying, stunning them temporarily. To begin this fight, you will need to attempt to open the north-eastern gate. He will begin walking towards you and will attack.

There is a safespot for Dad; enter the western end of the gate, and then let him speak, and stand right beside the gate on the northern end, where you can safely range or mage him. When Dad is at low health, a dialogue will trigger, players will have the option to kill or spare Dad proceed through the gate.

Do not exit back through the gate as Dad will fully replenish his life points. Prayer can be used here, but it may be best if you save it for the Troll General later on, unless you have a prayer potion or plan on making a return trip. 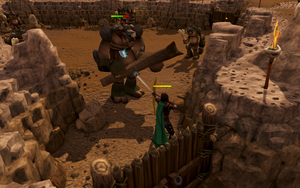 You can now pass through the northeast gate. Go past the level 74 and 75 mountain trolls, and enter the cave at the end of the path. Continue through the cave, and exit it. You should now be at the eastern side of a spiral mountain. Make your way north, then west around the mountain, passing the thrower trolls (Protect from Missiles will lessen the damage), until you reach an area full of mountain trolls on the western side of the mountain. It is possible with 47 Agility to use the cliffside shortcuts to bypass the thrower trolls.

Do not enter the troll camp, but rather go north through a ramp found immediately east of the camp to an entrance to the Troll Stronghold dungeon. 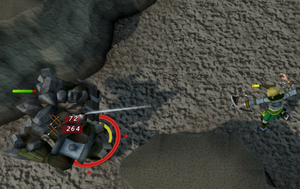 Inside are some more mountain trolls. From the entrance, walk south until you see a door on the west wall. Enter and go north to find three Troll Generals. Kill one general to get the prison key. Only one of the generals needs to be killed.

Due to their large size and rough terrain, it is very easy to safespot them if you are ranging, maging, or using a halberd, such as at the entrances of their own chambers. If you are using melee without a halberd, use Protect from Melee, as it will negate some of the damage from their attacks.

The sleeping guards who hold the cell keys.

With 30 Thieving, pickpocket both to get Cell key 1 for Godric's cell and Cell key 2 for Eadgar's cell. If you fail to pickpocket them, they will wake up and start to attack you. You then need to kill them to obtain the cell keys. If you do not want to fight them, you can hide behind one of the doors and stay until they become non-aggressive.

They can also be safe-spotted like the generals. The best way is to go into the empty cell north of Eadgar's and range/mage them, since the cell door is too small for them to pass through.

Once you free both Eadgar and Godric, go to Dunstan. The easiest way to get back to him is by Home Teleport to Burthorpe. Once teleported head east to the most north-eastern house, just south-east of Commander Denulth. Otherwise, use the exit south of the prison. Once outside, continue south and climb over the rocks and back through the underground passage. Talk to Dunstan to complete the quest. 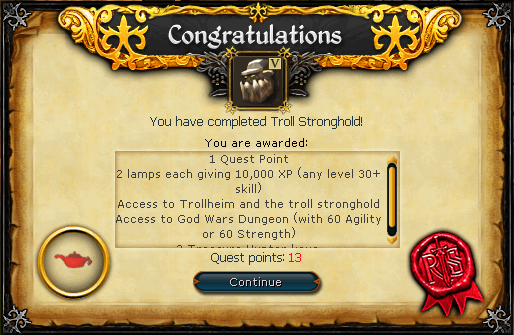 Troll Stronghold is directly required for the following quests/miniquests: