Troll Romance is a quest revolving around troll love; specifically that of Ug for Aga.

Ug loves Aga, but Aga is together with Arrg. Since Arrg is a lot stronger than Ug, Ug can't follow the regular mating ritual, which involves ripping the opponent into pieces.

Will you be able to find out what will impress the troll female more than a display of violence? Will you survive the journey to help a lonely troll find love? 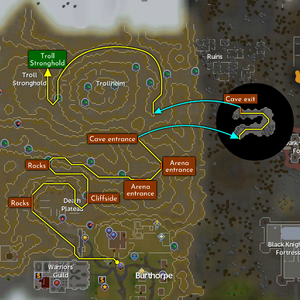 Getting to the Troll Stronghold from Burthorpe

Ug can be found inside the Troll Stronghold. To get to the stronghold, either use the Trollheim Teleport or walk through the mountains. From the teleport location, go to the south-west path using cliffside if possible, and take the ramp up to a cave entrance. After entering the Troll Stronghold, go north until you find a set of stairs going down. Once on the lower level, head south. Ug is in the western room.

Alternatively, you can also use the fairy ring code AJR and follow the route as marked in the image to the right (this path requires climbing boots for climbing the rock). If you enter the stronghold by using the secret entrance, walk north till you find the stairs leading up. Once you go up, you can find Ug in the southwestern room.

Talk to him to learn that he is in love with a female troll named Aga, who unfortunately loves another, aggressive troll called Arrg. Ug cannot gather the courage to ask Aga out, for fear of Arrg's wrath. As a good Samaritan, offer to help the poor troll, who promises not to eat you.

Speak to Aga in the room to the north. Aga is a very romantic troll, but she isn't sure if Arrg loves her or not. If he would bring her favourite flower - a Trollweiss flower - it would prove his love for her.

In the same room, talk to Arrg. He does not seem to be in love with Aga and also has no knowledge of the Trollweiss' location. Return to Ug and ask if he knows anything about the flower. He instantly becomes upset, saying that only someone who has lived a life in the mountains could know anything about Trollweiss.

Freda's house
Items needed: A maple or yew log, an iron bar, a rope, a cake tin, a swamp tar, and a bucket of wax

The updated Death Plateau quest must be completed before continuing.

As the only knowledgeable mountaineer you know is Freda, go to her to learn about the white flower. Her house is in the mountains, west of Burthorpe. She will explain that Trollweiss is a special kind of growth that only appears in the icy troll area to the north. The only way to get down to the plateau where the Trollweiss grows is by using a sled. She suggests talking to Dunstan, the Burthorpe smith, who knows a lot about making a sled.

Return to Burthorpe and head to Dunstan's house, in the north-east part of the city. Talk to Dunstan and he is happy to make a sled for you, provided he gets the materials - a maple log or yew log, an iron bar and rope. Dunstan exchanges the items for a sled, saying that it must be waxed before using it in the mountain snow. 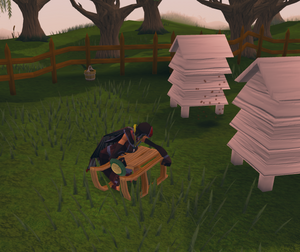 A bucket of wax may be obtained by using some insect repellent on a beehive west of Catherby, and then using a bucket on the now empty beehive; the insect repellent may be obtained from the nearby beekeeper, who will also explain how to obtain the wax. Now, with an empty cake tin in the backpack, use the swamp tar with the bucket of wax to get some sled wax. Once you have the wax, use it on the sled to make it possible to ride on the snow. 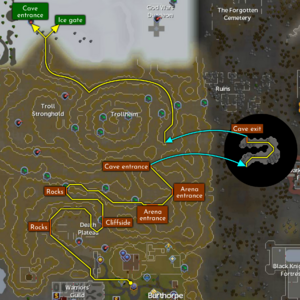 Path to the Troll Cave entrance from Burthorpe

Time to move to the next stop: Trollweiss mountain. Return to Trollheim as you are used to and make your way to reach the Trollweiss Dungeon. The entrance is located by the ice gate.

If you walk to there, go north like usual. But instead of continuing to the west towards the troll stronghold, take the north-eastern path via a cave until it starts snowing. You should pass by the boulder to the God Wars Dungeon, follow the path to the north.

If you teleport to Trollheim, climb down as if you were heading to the stronghold. But instead of entering the stronghold, take the path just east of the entrance and walk north.

If you use God Wars Dungeon Teleport, players should go west after passing through the boulder. 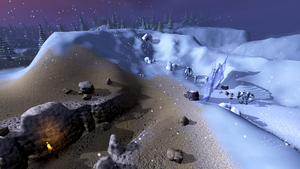 Fork in the road leading to trollweiss

Once they start to get near the snow, there is a 3-way fork in the road. The rightmost path is adjacent to an ice gate and two troll children. Players should walk a little north-west to reach the cave and pass by the ice gate. Do not spend too much time standing in the snowing area as all your stats will slowly decrease.

Enter the cave and walk through it to the north-west crevasse. Beware of the aggressive ice trolls because of their strong melee attack. You may use Protect from Melee for protection. 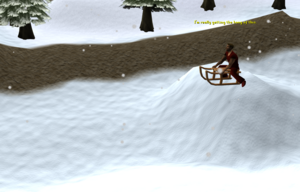 Sledding down the Trollweiss Mountain

When you are on top of the Trollweiss Mountain, walk pass by and beware of the aggressive ice wolves around the mountain. Start walking south near an ice covered boulder until you cannot step any further.

As Freda said, it used to be easy, but there has been some lethal snowfall there. Equip the sled and sled down the snowy path by sliding from the slope until you reach an icy plateau. After you stopped, do not sled any further south past this point, otherwise you will need to climb the mountain again.

Once you reach the south-western part of the plateau, unequip the sled and walk towards the circular area with a rock marking the Trollweiss flowers. Pick a flower on the floor. You could keep the flowers by picking another one, as one flower is required to give to Ug.

As long as a Trollweiss flower is kept in the backpack, you may leave by teleporting to the Trollheim or go to prepare for a battle. Alternatively, equip the sled and ride to the south and back to the shortcut. This requires climbing boots.

The Things We Do For Love...[edit | edit source] 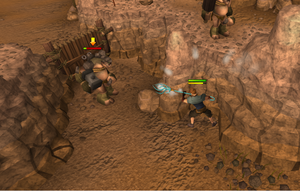 A safespot for fighting Arrg, avoiding his melee as well as range attacks.

Return to Ug, who is very glad about the flowers but is still afraid of Arrg, so he cannot give Aga the Trollweiss yet. The only option is to defeat Arrg.

Prepare for battle before talking to him. Food is necessary for lower levelled players. Taking some prayer potions may also be a good idea. If killed, a grave will appear outside the arena gate; if you plan on retrieving your gear after death, it is highly recommended that you keep a pair of climbing boots and an extra games necklace in your bank.

Once you are ready, confront Arrg and challenge him to a fight. You are swiftly transported to the troll arena, where the fight will take place. Arrg attacks immediately after the teleport, so be prepared. He attacks with melee, but also uses Ranged by throwing rocks. Turn Protect from Melee on and eat as needed, not allowing your life points to drop below 400. Arrg will despawn after a while, particularly if you spawn him and then get combat equipment.

Kill Arrg and return to Ug, telling him about your victory over Arrg. After getting overly sentimental, Ug thanks you and promises to present Aga with your kind gift. 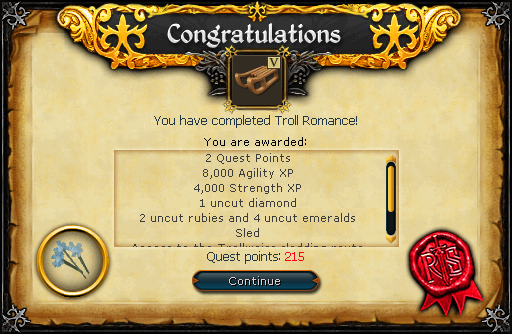 Troll Romance is directly required for the following quests/miniquests: