From the RuneScape Wiki, the wiki for all things RuneScape
Jump to navigation Jump to search
The Old School RuneScape Wiki also has an article on: osrsw:Troll Country 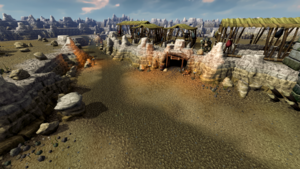 Entering the land of the trolls.

The Troll Country is a region in north Gielinor. It is a mountainous kingdom ruled completely by trolls.

Troll Country is full of adventure and peril. It is also the home to many quests. In order to access the icy area, you must complete the Troll Stronghold quest.

Trollweiss Mountain is the largest mountain in all of RuneScape. Under its imposing form lies the wondrous city of Keldagrim, where the industrious dwarves hammer in their halls. The rare and endangered Trollweiss flowers grow on its slopes.

Trollheim is a large, corkscrewed mountain in the middle of the kingdom. It is lined with many thrower trolls, and Mad Eadgar's cave lies at the summit.

The Troll Stronghold is the capital of the land of the Troll Country. It is populated by Trolls and their leaders, the Troll generals.

The Ice Path is a cold and deadly path up a third large but unnamed mountain. It is traversed in the quest, Desert Treasure.

Death Plateau is a dangerous plateau in the south part of the kingdom. There, a battle between the Imperial Guards of Burthorpe and the Trolls rages.

The God Wars Dungeon where the God Wars rage on to this day, is not a place for the faint of heart. Wicked beasts and evil demons roam the ice caves and if you don't state your side in the ensuing fight, chances are slim you'll come out alive.

The North is the most northern part of Troll Country. At the time of syzygy, when the planets align, the Mahjarrat meet here for the Ritual.

The Rellekka Hunter area is to the west of the kingdom and is the only hunting area entitled with "ice" or "snow". It is home to various huntable creatures and a hunting tutor. 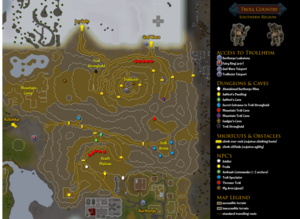