From the RuneScape Wiki, the wiki for all things RuneScape
Jump to navigation Jump to search
Item JSON: {"edible":"no","disassembly":"no","stackable":"no","stacksinbank":"yes","death":"alwaysinclwild","name":"Trixie's list","bankable":"yes","gemw":false,"equipable":"no","members":"yes","id":"39933","release_date":"24 April 2017","restriction":"removed","release_update_post":"Spring Fayre","lendable":"no","destroy":"You can get a replacement list from Trixie if this is destroyed, while the Spring Fayre is still running.","highalch":false,"weight":0.09,"lowalch":false,"tradeable":"no","examine":"A list of items Trixie has requested you find for her.","noteable":"no"}

Trixie's list was an item released with the Spring Fayre (2017) and given by Trixie. During Spring Fayre (2018) this list is randomly found while completing the event activities. When read, it listed the items that need to be used on the list in order to complete it. Alternatively, the list could be right-clicked and the "Complete" option selected.

Completion of the list would allow players to take it back to Trixie, where she would reward them with a Small XP lamp (Thieving).

Finding the list by taking part in the activities prompted the messages:

Checking off one of the items prompted the message You have ticked off one of the sets of items on your list. Complete the card so you can hand it in to Trixie for a reward.

Completing the list prompted "You have completed your list. Turn it in to Trixie at the Spring Fayre for your reward." 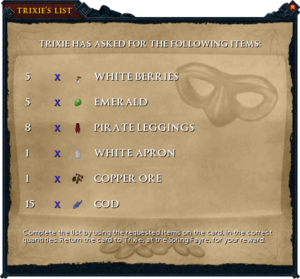 One of Trixie's lists

Possible items per list included five or six of the following:

Your copy of Trixie's list has been converted in to a small Thieving lamp.