From the RuneScape Wiki, the wiki for all things RuneScape
(Redirected from Trimmed Completionist Cape)
Jump to navigation Jump to search
For other variants of this item, see hooded, untrimmed.
For the achievement, see Trimmed Completionist Cape (achievement).
Item JSON: {"edible":"no","disassembly":"no","stackable":"no","stacksinbank":"yes","death":"reclaimable","name":"Completionist cape (t)","bankable":"yes","gemw":false,"equipable":"yes","members":"yes","id":"20771","release_date":"3 May 2011","release_update_post":"Capes of Distinction","lendable":"no","destroy":"You'll have to buy this back for 5,000,000 coins at Varrock Museum if you destroy it.","highalch":false,"weight":0.453,"lowalch":false,"tradeable":"no","examine":"We'd pat you on the back, but this cape would get in the way.","noteable":"no"}

The completionist cape (t) is a cape that is awarded to players who have "completed the game" by finishing all major content available, to whatever extent is possible. When bought it comes with a corresponding hood. It can be bought in Varrock Museum for 5,000,000 coins from the museum guard on the top floor by members who have unlocked the normal completionist cape and completed a number of additional requirements listed below.

The cape's stats are identical to those of max cape - this generally makes the max cape a preferable option in dangerous combat where hybrid bonuses matter, as the max cape is cheaper to reclaim. The Igneous Kal-Ket, Igneous Kal-Xil, Igneous Kal-Mej, and Igneous Kal-Zuk are the best capes if the multiple styles of the max and completionist capes are not needed.

As new content (quests, tasks, accomplishments, etc.) is introduced, much of it is added to the requirements for the regular or trimmed version of the cape, which makes it difficult to wear for a long period of time. If a player is wearing the cape when new content is added to the requirements, it will be unequipped and placed in their inventory. If their inventory is full it will be placed in their bank.

The trimmed version of the cape unlocks [Name] the Completionist title. This title can be used without wearing the cape once unlocked, and will re-lock when the cape is unable to be worn, when the requirements are increased. As long as a player has the right to wear the cape, they may purchase additional capes from the museum guard. Purchasing the cape unlocks a cosmetic override of it in the wardrobe interface, it can then be recoloured from there.

The cape dates back to the Second Age, when it was enchanted by the mage Dahmaroc.

The customisation screen for the completionist cape

A player touching the cape without the requirements 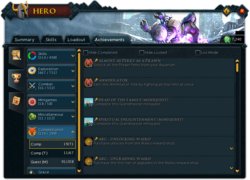 The interface displaying the remaining requirements

The colours of a completionist cape can be customised by using the option in the right-click menu of the cape. In the Skillcape Customiser interface, players have the right-click option on the either of the four colour palettes to get or set a certain colour via the HSL colour algorithm (hue, saturation, and luminosity).

This cape leaves a particle trail behind the owner. These particles change from white to gold when upgraded to the trimmed version. The particles' colour is not customisable beyond this.

The completionist cape has several abilities, all of which are shared with other items and methods of access.

The update of 24 June 2019 removed many of the benefits of equipping the completionist cape, making them available at all times instead.

The selected perks are applied on any cape the player is wearing, including cape-slot items that are not actually capes. The exceptions are capes that have their own perks (skillcapes, master skillcapes, and expert skillcapes), as their own respective perks take priority. If you become ineligible to wear the max or completionist capes, due to a new skill being released, the perks will stop applying until you can wear it again.

Since the perks are shared across all capes, the player cannot add different perks to the max and completionist capes, and if the player owns more than one of each they will all have the same set of perks. However, an Expert cape of Accomplishment (which can hold up to two skillcapes from their respective group of skills) may have different perks, which are only accessible when wearing that specific cape.

The cape used to grant the perk cannot be retrieved, which means that switching perks effectively costs 99,000 for a regular skillcape, and 120,000 for a master skillcape. For a list of perks see this listing.

Members can buy the cape and hood on the top floor of the Varrock Museum for 5,000,000 coins from the museum guard. If anyone who hasn't met all achievements tries to touch it, they will be turned into a random animal (including monkeys, squirrels, and chickens) and knocked away from the cape. They will also be given a list of remaining achievements. The quickest way is to open the Hero interface: the Achievements tab contains a list of both untrimmed and trimmed cape requirements both of which can also be filtered to only show outstanding achievements. Another way is to use the right-click option on the throne in the Max Guild which requires the player to be maxed.

There are 86 achievements in this subcategory (showing 86).

Players who have managed to achieve this cape can perform an emote in which they transform into a dragon, fly up and hover in the air while burning a classic "RS" sign into the ground before landing and transforming back into a player. The RS symbol disappears when the emote is over.

If this emote is performed with an untrimmed cape, the dragon is silver; This affects the wing membranes and along the dragon's neck and head. The movements of the emote remain the same.