The promo banner for Tribal Trials

Tribal Trials is a Treasure Hunter promotion that started on 18 April 2018 and lasted 6 days. Players completed a series of tasks similar to previous events like Faceless Assassins and Zodiac Training. The player could open Treasure Hunter to receive a tribal task list that could be clicked to begin the event.[1] 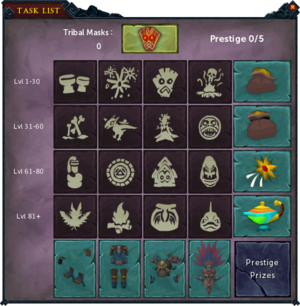 The start of the promotion was indicated by the following login messages:

After finishing all the tasks 5 times from the list, stamps won on treasure hunter have no further purpose other than cashing them out (7,500 coins) and redeeming them for a medium prismatic lamp.

Tasks can be skipped instantly by using a tribal mask stamp.

Rewards are given for completing rows, columns or full tables at each of the four prestige levels.