Tribal Totem is a quest that involves the retrieval of an artefact sacred to the Rantuki tribe of Karamja, which has been taken from them by the nobleman Lord Handelmort.

Lord Handelmort of Ardougne is a collector of exotic artefacts. A recent addition to his private collection is a strange looking totem from Karamja. The Rantuki Tribe are not happy about the recent disappearance of their totem. Kangai in the Brimhaven pub

Start by conversing with Kangai Mau in The Shrimp and Parrot inn, located west of the Brimhaven Agility Arena. Kangai tells you that he is a member of the Rantuki tribe, and in search of an adventurer for a mission.

Lord Handelmort, an Ardougnese explorer, recently stole their tribal totem to use in his "private museum" back home; Kangai requests you to bring back the totem to its rightful place.

Accept his request and travel to East Ardougne, either by using the ship north of the inn, or teleporting to the Ardougne lodestone. Once there, head to the Handelmort Mansion in the heart of the city, and directly east of the church.

Try to enter the house, but you'll find that it is locked. Talk to the gardener, Horacio, about the house and he'll tell you about his ways of going around the security, accidentally blurting out about knowing the combination to a door lock - Handelmort's middle name. A quick look through the guide book on the table, in the house directly south of the mansion (the house with the estate agent) tells you that his middle name is Kurt. 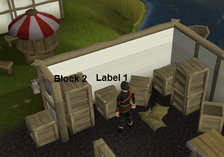 The only way into the house is by using a new teleporting invention from wizard Cromperty, who can be found in the house north-east of the Ardougne market. Ask him to teleport you in order to find the location of the target teleport stone; it is placed in the piled crates at the RPDT depot, responsible for all deliveries from the city. The depot is located east of the Ardougne Zoo in the south of the city.

Search the crate next to you to find an address label, addressed to Lord Handelmort. Use this label on the north-east crate, intended for the Chamber of Invention of the Wizards' Tower to cause the teleport block to be delivered to Lord Handelmort's house instead. 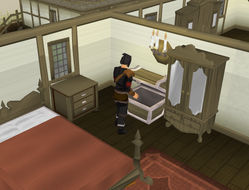 Retrieving the totem from the mansion.

Once you have done this, talk to an RPDT employee and ask when the crate will be delivered; they say they could do so now. Return to Wizard Cromperty and ask him to teleport you again, now you are teleported inside the house of Handelmort's.

Inside, try to go through the west door, but you'll be faced with a coded lock on the door - enter the password: K-U-R-T. Go through the door and investigate the stairs; if you don't, a trap will activate when using the stairs, dropping you into the Ardougne sewers. If you fall down the trap, talk to Cromperty again to be teleported back inside the house.

If you don't have 21 Thieving, you will get a message saying "You don't find anything interesting". But climbing up the stairs will trigger the trap.

Go up the stairs and enter the room to the east. Open the chest there and search it to find the stolen tribal totem. Finally, go back to Brimhaven and return the totem to Kangai Mau. 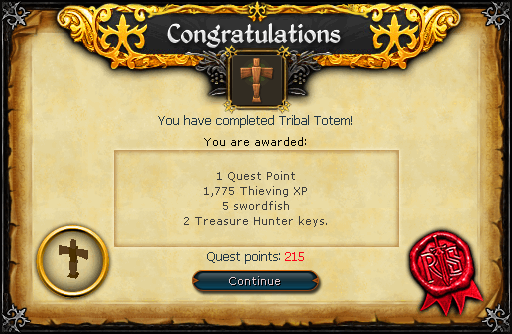 Tribal Totem is directly required for the following quests/miniquests: