From the RuneScape Wiki, the wiki for all things RuneScape
Jump to: navigation, search
The Old School RuneScape Wiki also has an article on: osrsw:Trees
This article is about all varieties of trees. For the ordinary tree, see Tree.

Trees are a part of the natural scenery of RuneScape. Trees can be found all across the realm of Gielinor, but especially in forested kingdoms, such as in the tropical jungles of Karamja and the temperate forests of Asgarnia and Misthalin.

A player lighting logs on fire.

Trees have many functions in RuneScape. Players can interact with most trees, although some are non-interactive and only exist as scenery. Trees play a role in quests, skills, and transportation.

Players can use a hatchet to cut trees using the Woodcutting skill to gain logs, and different trees yield different types of logs when cut. A single tree, except normal and achey trees, may theoretically provide an infinite amount of logs, but will usually provide between 1 and 20 sets of logs.

Players can then burn these logs with the Firemaking skill to make a fire, usually by using a tinderbox on them. They can also use the Fletching skill to shape logs into items used for Ranged by using a knife on them.

Members can also grow certain types of trees from seeds using the Farming skill. Players can grow trees by planting tree seeds, fruit tree seeds, or spirit tree seeds in soil-filled plant pots, watering the seeds with a watering can, waiting for a short germination period, then planting them with a seed dibber in tree patches. The only trees which can be grown using Farming are the types of wooden trees which can be cut using the Woodcutting skill, fruit trees, which produce fruit, and spirit trees, which can be used for transportation.

Bagged trees can be planted by members in tree hotspots in gardens in player-owned houses using the Construction skill. This also requires a certain Farming level and a watering can. Bagged trees can be bought from the gardener in the park in north-east Falador. These trees cannot be cut.

There are also four types of trees which yield logs which can be made into planks at the sawmill. These planks can then be used to make furniture using Construction.

Specific trees occasionally play roles in quests, such as the Dramen Tree, which is the focus of the Lost City quest, the swaying tree in The Fremennik Trials, or the windswept tree in Olaf's Quest. The Grand Tree in the Tree Gnome Stronghold has a role in some quests involving gnomes, including The Grand Tree quest and the Monkey Madness quest.

The Tree Gnome Village quest also rewards players with the ability to use spirit trees, sentient ancient trees which are used by gnomes and friends of their race to travel between certain locations.

Canoe trees can also be cut down using a hatchet and the Woodcutting skill. Once a canoe tree has been felled, players can right-click on it to make one of four types of canoes, which can be used to travel up and down the River Lum, even into the Wilderness.

There are four main types of trees. The type of tree usually determines its uses.

Members can grow these trees from tree seeds planted in plant pots and then in tree patches using the Farming skill.

These trees yield logs which can be made into planks at a sawmill. These planks can then be made into furniture using the Construction skill.

These trees play roles in quests.

These are trees which are used to travel around the RuneScape realm of Gielinor.

A tree stump is what remains of a tree after it has been cut down by a player. The stump's examine text depends on the type of the original tree, so it is easy to determine which stumps go with which trees. Some time after the tree is cut down, anywhere from 30 seconds to 3 minutes, most stumps will respawn into the trees they came from so they can be cut again. Some stumps, however, are purely for decoration and will not do so. If two or more woodcutters are cutting wood and one of them completely cuts the tree, the rest of the woodcutters will still continue with the cutting animation in the air, stopping it after a few seconds. Stumps on tree patches can be removed by using a spade on them. 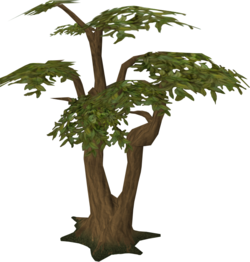 The new and current trees south of Falador, then updated in advance of the Clan Camp.
Retrieved from ‘https://runescape.wiki/w/Trees?oldid=35473756’
Categories: