Trees that glowed appeared with the release of the Tribute to Guthix event. They were a manifestation of the Anima Mundi in the form of a face on the bottom and has a green glowing aura. They served no significant purpose other than mourning the death of Guthix. 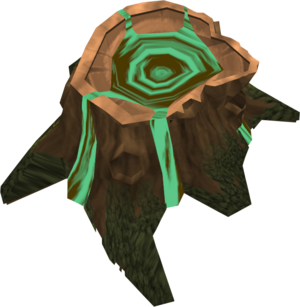 They could be found anywhere around RuneScape where regular trees were, but some notable locations were: