Treasure map is a reward featured in the Buried Treasure Treasure Hunter promotion.

When wielded unsheathed or dropped, it depicts a map similar to Treasure Trails maps, which points to the location just north of the Combat Training Camp near Ardougne. Digging at this spot with a non-tool belted spade will uncover a rusty chest.

The item can also be found in Skilling chests during Loot Duels (Treasure Hunter promotions). A bug means that the map cannot be read (possibly if one has been previously used). The spot to dig is at 07 degrees, 52 minutes north, 02 degrees, 13 minutes east, according to a sextant. If you don't have a sextant, this is the northern of the two tiles immediately west of the large rock sandwiched between an oak tree and the river. 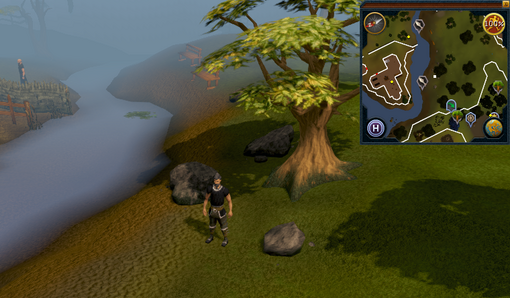 This information has been compiled as part of the update history project. Some updates may not be included - see here for how to help out!
Retrieved from ‘https://runescape.wiki/w/Treasure_map_(Buried_Treasure)?oldid=35654441’
Categories:
Hidden categories: