From the RuneScape Wiki, the wiki for all things RuneScape
Jump to navigation Jump to search
Treasure chest? (edit)? (edit) 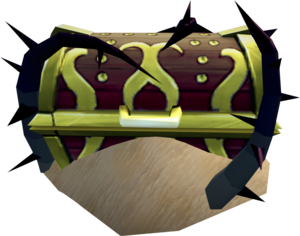 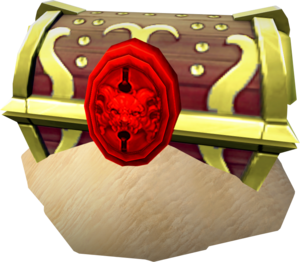 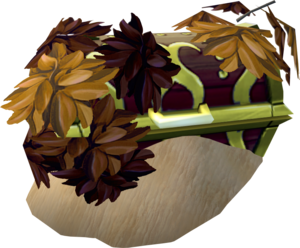 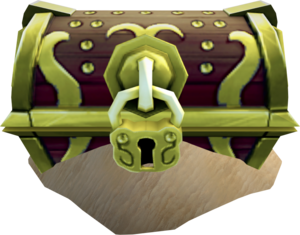 Treasure chests are one of the main three objectives in Shifting Tombs that must be opened and searched before the time limit of 5 minutes is reached. There are four types of chests, each requiring a different skill to open.

Treasure chests are blocked by skills, similar to skill doors in Dungeoneering. They can only be unlocked with the requisite skill level of the skill type the chest requires: Firemaking (wax seal), Farming (buried in dirt and overgrown with vines), Woodcutting (not buried, but covered in larger vines), and Thieving (large lock). Chests vary in level all the way up to 99.

When looting a chest, 2-18 feathers of Ma'at are commonly received, with tier 5 Menaphos Reputation increasing this amount. These fetch a decent price in the Grand Exchange due to their use in killing monsters in the Sophanem Slayer Dungeon, and it's recommended to loot every chest possible for the additional profit. If players have toggled off all statues to receive coins instead of experience as a reward, the amount of feathers received from opening chests will be doubled, effectively giving between 10-36. In either case, there is a 1/800 chance for players to loot an off-hand khopesh of the Kharidian instead of feathers from a chest. If one is looted, a message will appear stating "You find an off-hand menaphite khopesh." and trigger a friends and clan-wide broadcast. This is a tier 82 weapon which may be upgraded to tier 92 with drops from The Magister.

Looting a chest also occasionally spawns Corrupted Scarabs which yield coins and Slayer experience when squished. Squishing these causes damage to the player, and can cause an unsafe death if you are not careful.

Treasure chest loot count is not shared within a group. Once opened by any player, a chest will appear open to all players; each player must search a chest individually for it to count towards their own objectives.

In solo runs, the amount of chests needed to be opened and looted can vary, ranging from 0-9. There may be additional chests outside of the major requirement like sarcophagi, although this is generally uncommon.

This information has been compiled as part of the update history project. Some updates may not be included - see here for how to help out!
Retrieved from ‘https://runescape.wiki/w/Treasure_chest_(Shifting_Tombs)?oldid=35702056’
Categories:
Hidden categories: