From the RuneScape Wiki, the wiki for all things RuneScape
< Treasure Trails‎ | Guide
Jump to: navigation, search
Shortcut:

For information on how to solve them, go to the Puzzle box/Guide page.

When speaking to an NPC in a level 3 or 4 trail, the player may receive a puzzle box. Puzzle boxes are 'step two' of a clue: first the player has to find the right NPC to speak to (when they get a cryptic or anagram clue), and then they have to solve the puzzle, to advance along their trail.

Puzzle boxes are the RuneScape version of n-puzzles – they contain a scrambled image that players must work to unscramble by clicking on tiles to move them to an empty space. Once the puzzle box is completed, players will need to talk to the NPC who gave the puzzle to receive the next clue or the reward.

Many people find puzzle boxes daunting, but taken from the right approach they can be simple and quite fun. The game scrambles the puzzles by randomly moving pieces approximately 50 - 200 times.

If the player logs out, without finishing the puzzle, they will lose all progress and will have to start over again. However, if the puzzle box belongs to an elite clue, they will be unable to ask for another one, and must either complete the puzzle or drop the puzzle scroll box/casket. 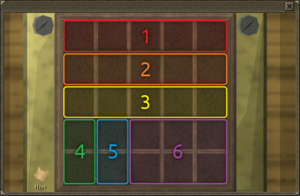 The steps to solve a puzzle box the most efficient way without messing up the already-completed tiles.

To solve the puzzle, (refer to the picture to the right)

Note: After a step is completed, DO NOT re-arrange any tiles in the previous step; just work with what you have.

Following is a list of all known puzzle boxes. The completed puzzle also can be viewed by hovering on the Hint icon at the bottom left of the screen. When finished, simply close the box; if on a hard clue, speak with the NPC who gave you the box.

The bloodveld puzzle only appears after completing the You Are It quest.

The update history project is a work-in-progress – not all updates to this topic may be covered below. See here for how to help out!
Retrieved from ‘https://runescape.wiki/w/Treasure_Trails/Guide/Puzzle_boxes?oldid=35249425’
Categories:
Hidden categories: