From the RuneScape Wiki, the wiki for all things RuneScape
(Redirected from Treasure Trails/Guide)
Jump to: navigation, search
"TT" redirects here. For other uses, see TT (disambiguation).

Treasure Trails is a members-only Distraction and Diversion in which players follow a series of clues leading towards buried treasure. A Treasure Trail is started by finding a sealed clue scroll, which may be dropped by various monsters, pickpocketed from H.A.M. Members and elven clan workers, received from a treasure chest decoration in an aquarium, purchased with thaler, obtained from the Prosper perk, or by training Archaeology, Divination, Fishing, Mining, Farming, or Woodcutting. The chances of receiving a clue scroll increase with the appropriate tier luck enhancer.

As of the clue scroll overhaul on 26 February 2018, players can collect as many as 25 sealed clue scrolls of each type of difficulty, subject to a soft cap. Originally, players could only have one clue scroll at a time (and reward caskets) which was later changed to one of all difficulties, and now in its current state. This soft cap can be partially bypassed, such as guaranteed or item holding services. Once the player hits the soft cap however, players cannot obtain any more clue scrolls, outside of guaranteed sources.

Only one of each type of sealed clue scroll can be open at a time. Attempting to open a sealed clue scroll if a player already owns an open one will result in the following text in the chat window: You already have an active easy/medium/hard/elite treasure trail. You'll need to either complete or destroy that before starting another.

South-west of the Grand exchange's southern gate, a treasure trail expert named Zaida has set up the Treasure Trails Reward Shop with her pack yak, Nigel. Besides offering assistance and information to fellow treasure seekers, she maintains a Treasure Trail information board. There is also a stack of Treasure Trail collection log books behind her for players to use.

If the player cannot complete the clue, then it is recommended to exchange it for another with the Globetrotter backpack (if available), or destroy it. Some clues (notably emote clues) may also be skipped with a Skipping ticket, although this may not be cost-effective. Zaida can also exchange the clue scroll for a lower difficulty if needed, though she will not convert any easy clue scrolls as they are the lowest tier.

From skilling, the level of the clue scroll is determined by the level requirement of the skilling action and the skill. Similar to when killing monsters, master clues may rarely be obtained in place of an elite clue.

If you have the Totem of Treasure activated the length to finish a clue is reduced by one step.

Trails that have more clues and require a longer period of time to complete do not necessarily guarantee the chances of a more valuable prize. The prize obtained is determined when the casket is obtained at the end of the trail and is not affected by the length of the clue trail.

There are 15 different types of clues that may be encountered during Treasure Trails. Click the buttons below for guides on solving them or keep reading for a short description of each type.

An anagram is a string of letters which have been purposefully scrambled. For example: od olpe is, unscrambled, poodle. Anagrams can appear in medium, hard, and master clues. The solution of an anagram is always the name of an NPC. When the player talks to the NPC in a hard trail, they will receive a challenge scroll or a puzzle box. Solve the puzzle box and talk to the NPC again or tell the NPC the answer to the challenge scroll to receive the next clue.

Celtic knot puzzles are only found in elite trails. This puzzle consists of three knots; one red, one grey, and one blue. On each knot is a number of various runes. The goal of this puzzle is to match the runes on each knot with the underlying one below. An online interactive celtic knot puzzle can be found here.

Chest keys are 'step two' of a clue and found in medium trails. Sometimes a clue will lead the player to a locked chest or drawer. A key will be needed to open it, which will be dropped by a specific, usually local, monster. A clue on the object the player has been lead to will tell which monster to kill. Chest key clues are found almost exclusively on easy and medium level trails. The key will disappear when used to open the chest or drawer.

Monsters that drop treasure trail keys drop them only when the player is in possession of that clue. Notably, these keys are enabled in the various monsters' drop tables as soon as the player acquires the related clue step. This allows players to actually obtain the key without needing to receive the second half of the clue from the locked object, effectively bypassing half of the clue step and saving some time.

Compass clues are only found in elite and master trails. The inventory is replaced with an arrow which points to the spot where the player need to dig. There are no clues which say where about the arrow will lead, so players will have to walk across Gielinor following the arrow. If the player is standing on top of where they need to dig, the arrow is replaced with an X. Sometimes if the player is in an area which is considered not in the RuneScape plane, the arrow will spin uncontrollably.

In master trails, some compass clues may direct players to The Arc. 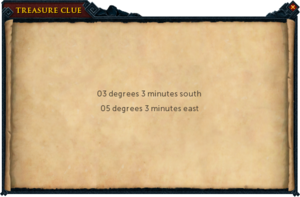 A coordinate clue is a clue scroll that contains a set of coordinates. Much like the real-world longitude & latitude geographic coordinate system, coordinates in RuneScape indicate a precise point somewhere on the surface where the next clue scroll, or potentially the treasure casket, is buried. Coordinate clues will only appear in Treasure Trails of medium difficulty or above. A clue wizard attack should be anticipated.

For hard and master clues, doing the emote will not summon Uri but instead an aggressive doppleganger NPC known as the double agent, who must subsequently be killed in order to make Uri appear again. The double agent's strength varies depending on the difficulty of the clue and where the clue takes place. It uses only melee attacks and can easily be killed with any combat style, though magic is most effective. The player can change equipment to kill the agent, but they will have to change back into the original items from the clue in order to complete it.

Map clues are an image of the location the player needs to search to advance along their trail. Maps are found across all levels of clue scroll. They are rough pictures of a very local area, normally about the size of the Lumbridge Castle. If the map leads to an X, the player needs to take a spade to the place indicated on the map with the X and dig there. If the map leads to a crate, it must simply be searched. Sometimes players may find a small pile of crates or a multitude of them. Search all of them until the next clue or the reward is found. Maps can include landmarks such as buildings, fish to indicate fishing spots, roads, rivers, bridges, and other things.

When speaking to an NPC in a hard or elite trail, the player may receive a puzzle box. Puzzle boxes are 'step two' of a clue: first the player has to find the right NPC to speak to (when they get a cryptic or anagram clue) and then they have to solve the puzzle to advance along their trail.

Puzzle boxes contain a scrambled image that players must work to unscramble by clicking on tiles to move them to an empty space. Once the puzzle box is completed, players will need to talk to the NPC who gave the puzzle to receive the next clue or the reward.

Scan clues are found on elite and master clues. This clue scroll scans an area of a specified amount of squares (or steps). The clue indicate a place and the range of the scan. As the player scans the area, a small ping appears under the player, which increases in frequency the closer the player is to the correct spot. When in range, a flashing arrow will appear both on the game screen and mini-map.

There is a slight chance for combat while completing scans with Guthix wizards appearing on elite trails and either a Cabbagemancer, Bandosian wild mage, or Armadylean shaman on master trails.

In master trails, some scan clues may direct players to The Arc.

Simple clues are exactly what it says on the tin. They are almost invariably found in easy trails. These clues tell precisely what to do; either the player has to talk to someone or search a specified location.

Players will be asked to complete a random task, which usually requires performing a high level activity. They only appear on master clues.

Players must complete "towers". Refer to the page for more details. They only appear on master clues. 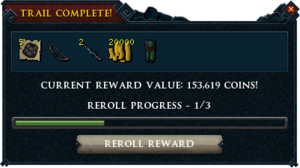 An example of a Treasure Trails reward

Players receive various rewards when they complete a clue. The rewards are randomly picked, and usually three or more different rewards are given in return. Players automatically receive the rewards when they talk to someone (e.g. by completing a puzzle box). Otherwise, they will get a casket instead, which contains their rewards. In elite and master trails, players may need to solve a puzzle before the casket can be claimed.

Caskets can be stacked and do not count towards the soft cap on scrolls. This means a player can hold as many caskets of any tier they wish.

Players may reroll their rewards if they are unsatisfactory, but they must complete three of the same difficulty of clues to reroll their rewards, and they can only hold up to three rerolls at a time, though owning four pieces of the globetrotter outfit can allow players to store five of these rerolls instead. Using the appropriate tier of a luck enhancer gives a +1% chance for rarer clue-specific loot, and they'll usually trigger an in-game message in the chat box if such an item is rolled. Free chest rerolls can be obtained from clues, albeit rarely.

Treasure Trails are the primary source for fortunate components given the numerous unique items from Treasure Trails. following the release of Invention. These component-giving items can be sold for a high price on the Grand Exchange or disassembled for the player's own use.

Treasure Trail rewards also feature a "bad luck mitigation" mechanic.[1] The running tally is unique for each tier of clue, so completing any Hard Treasure Trails without a very rare item increases the chance of getting one from another Hard but does not affect Elites.

From any level[edit | edit source]

The items listed below are the rewards that are possible from easy Treasure Trails. Two to four items are awarded from each Reward casket (easy) opened.

The items listed below are the rewards that are possible from medium Treasure Trails. Three to five items are awarded from each Reward casket (medium) opened.

The items listed below are the rewards that are possible from hard Treasure Trails. Four to six items are awarded from each Reward casket (hard) opened.

The items listed below are the rewards that are possible from elite Treasure Trails. Four to six items are awarded from each Reward casket (elite) opened.

Note: All rarities listed below assume you have tier 4 luck.

The items listed below are the rewards that are possible from master Treasure Trails. Four to six items are awarded from each Reward casket (master) opened.