Zamorak returns once more, as embodiment of chaos in a swiftly changing world.

Topics of note in this extra long edition of letters include: the quality of sewage in RuneScape, how to achieve the perfect evil laugh and the psychological benefits of a battleaxe in combat.

Wandering my realm of the Wilderness recently, I noticed a change most severe... the ground, blackened from fire... monsters and creatures wandering, attacking anything that moves... piles of the dead scattered without thought or care... and you know what?

If I was a deity of softer sensibilities, I might even have shed a tear.

Cheered no end by the terrible beauty of the Wilderness, I decided I would spread my good humour amongst my followers and answer a few questions, so let's see what we have in the mailbag this month...

How do you do evil laughs so well? I've practiced day after day and still haven't devoloped a good one, muhahaha *cough* see!? im horrible!!!Please give me a great tip.

Please forgive me for your time,

You have to start the laughter from your diaphragm, as low in pitch as possible, then gradually make it louder and louder as you build it up.

It also helps a lot if you have something funny to think about.

While traveling around the world of runescape I noticed something quite odd...THERE ARE NO EVIL QUESTS! Being a lover of all things evil I was wondering, why isnt there ANYONE in the whole of runescape that wants me to go kill a farmers sheep, to steal a knights sword or to summon an evil demon to wreak havoc upon the inocent (or not so inocent as it may be) townsfolk of Vorrock. It would be nice for once to be rewarded for doing evil deeds, even though doing evil is a reward of as itself I wouldnt mind being given a nice new sword with whom I can slay some some farmers.

Well now, that's not quite true... Just off the top of my head I can think of at least two seperate quests where you can assist me in my cause to rid this world of the sickening influence of the braggard Saradomin!

Why, in the Temple of Ikov quest you have the chance to assist my good (or should I say 'bad'?) friend Lucien in his lust for power, and in the Hazeel Cult quest not only can you aid me in resurrecting the dread lord Hazeel to help my plans for this world, but you get to poison a dog loved dearly by a family!

What more can you ask for? I am also sure that at some point in the future I will require the services of ruthless young adventurers to help me with my plans...

hello,this is zac213 and i want to know what you would look like in 3d?

sent a photo on this next to this message

Kebabs are not made from Goblin meat... I am not quite sure where you heard that rumour...

They're made from camels. It's much tastier.

Goblins tend to have a slightly nausea-inducing odour when fried, and tend to leave chunks between the teeth.

Trust me, I've had some experience with this.

As for my new looks... well, you can see my wondrous visage for yourself!

Just a quick question, why are there sewers but no toilets?

a fan of your work,

Surely that is infinitely preferable to the alternative - toilets without sewers? Or would you really wish to roam a land that stank more than Guthixs' dress sense?

You know, personally I like to combine the two. 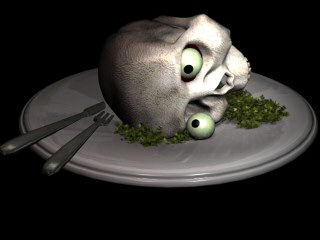 With some fava beans and a nice chianti.

i already read your pathetic brother guthix's opinion on pure fighters, but i want to know what you think.

If they win their battles I praise their bloodlust.

If they lose their conflicts I mock their inexperience.

Change or die; this is the way of the warrior.

Please answer all my questions!!!

Whats this? I answered all of your questions? Hmmmmm. Ah, I'm in a good mood. I won't ask for anything in return. This time.

My most horrible god ever Zamorak,

I have slayed many with my trusty blue blade but I ponder upon one thing. Why can't we dye our armor and weapons? It would be great to have a blood red blade and blood red armor, but all I can get is bronze stuff that's brown.

Also, I wonder why Runescape does not have status things like poison. It would be great to carry a poison blade so that retreating cowards suffer damage the more they retreat, and they cannot log out until they are cured. Maybe you could invent a poison like this that could only be cured by sleeping in a proper bed or eating a potion, etc. It would make killing all the more pleasurable!

Well, a sense of style in your violence is always important, unfortunately the dyes currently used in RuneScape are not only extremely toxic when consumed, but also highly corrosive.

Only a fool (or a Goblin) would be thoughtless enough to destroy the strength of their armour for a purely cosmetic change.

That's not to say such a process might not be possible sometime in the future however; the ingenuity of the councils research & development department never ceases to amaze me. 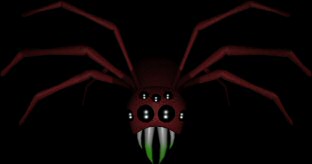 And poisons? I take it you haven't seen many of my beautiful red spiders on your travels? As frustratingly pathetic as Guthix is, his skill of Herblore does have a couple of cool things you can do with it - like poisoning your weaponry to inflict greater damage upon your enemies...

By the way, playing 'the gods' to answer your emails is a good idea.

A player of Runscape
Do you think your better then Guthix and Saradomin? Nequillim

Think? I know it!

I come to you because you seem the god who likes people when your weapon is lodged between their ribs. My brother and i have long been thinking an armoury is lacking without a spear. We have decided to ask you to grant the world another sharp, pointy thing to kill people with. Im sure that you could get some to weapon dealers over runescape. I dont really care who you kill to do it, i just crave for a spear.

i of the dea

I agree, spears are an excellent way of getting of getting your point across, and in, an enemy.

So good in fact, they have been available since April of 2003...

i have one question...

You act as though they are something different! Every warrior worth his weapons knows that a good offense IS a good defence! Attack first, and be at the advantage!

dear oh great zamorak, i know guthix is against pkers, but are you too?

Not at all! I appreciate the good work they do for me, on a daily basis.

Even if they themselves do not recognise that the work they do is indeed for me, for every death in the Wilderness adds to my power...

And so my time draws near, and once more I must grab my trusty bloodied axe and bring more foul creatures to this world to torment the Saradominists and Guthixians with...

Art thou the one who sayeth a true Zamorakian uses thou fist? I quoth thee again;

Evil Doer asked "what sword you have?" To which I reply: weapons are for the weak. A True Zamorakian would rejoice in nothing less than the slaughter of his enemies with his bare fists.

What sort of Zamorakian art thou?

On another subject, I hath slain 5127 of your followers in the name of Saradomin.

I'm the kind of Zamorakian who strikes fear into the heart of my enemies by wielding fabulously impressive weaponry, and then intimidates further by laying my weaponry down and smiting them with nothing but my own strength. Just so they know they're not even good enough to bother using weaponry upon.

I'm also the kind of Zamorakian who doesn't like to lose, and if the odds of battle seem to be shifting against my favour I have a large bloodied axe handy to redress the balance. Honour goes so far, but victory in the battle is all that counts.

Might I ask given the slaughter you attribute to yourself, what kind of Saradominist are you?

I think I shall see you at my fortress as an ally sooner than as an enemy...

is it true Guthix is morbidy obese?

Now, having been uncharacteristically helpful in these letters, I fear I must make amends, and return to my favorite hobbies of torturing the pathetic Reldo, and annoying the insufferable Saradomin... so now I must leave you, loyal subjects of disorder, to remember my words;

Use your strength to crush those who oppose you, and show your enemies no mercy nor respite.

And I wish you all a happy Zamorakian Valentines day!

DISCLAIMER: The views of Zamorak do not reflect the views of Jagex Ltd or its employees. We'd ban him, but he's a god.