The Rimebound Letters is a lore and history relating to Daemonheim and the Fremennik Sagas written by Mod William. It is a series of letter written by those under Bilrach.

This small collection of letters is an interesting (if harrowing) curio. The letters were found several years ago among a frozen bundle of ledgers, research journals and other articles of paperwork too damaged to be recovered, within the abandoned remains of a small trade caravan on the edge of the Daemonheim Peninsula. A common thread is that they all mention an absent master, sometimes known as “Bill”. Whoever this Bill was, he seems to have been a pivotal figure in Daemonheim's history. This warrants further research! 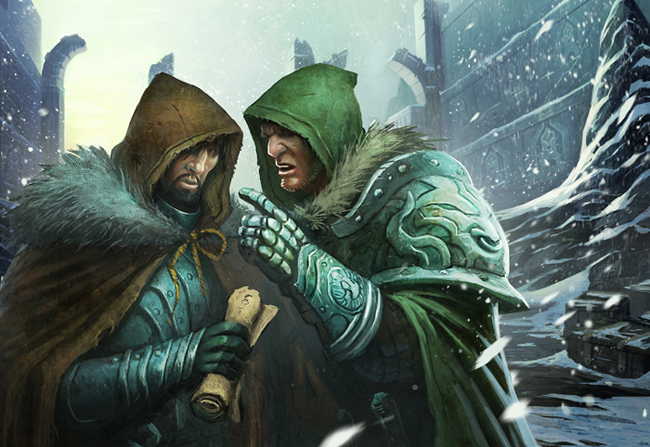 Please find enclosed this month's books. I think you'll find everything to be in order - indeed, you'll no doubt be pleased to see that profits are already far in excess of those projected for the year. Never hurts to be the bearer of good news to those on high, does it? Remember that it's my canny business acumen that'll have the Cartel's big boys eating out of your palm - just be sure to have some of that fine Asgarnian single malt set aside for when I get back.

Gods know I've peddled tat to rubes before, but these soldiers are something else entirely. They'll lope from those tunnels, sallow-faced and dead-eyed; some of them'll practically take your hand off for a sample of weevil-ridden bread, or they'll clamour to outbid each other for a keg of that watery bilge I picked up in Morytania, even coming to blows over it. Then, they'll shuffle off, muttering to themselves and clutching whatever they've bought to their breast like it was their first-born, tossing pouches of coins at your feet as an afterthought.

I'm sending this on to you prior to my return, as we've had a number of unusual commissions. Among these is a request from a man named Yudura for a number of slaves, as well as cadavers in varying states of decay. There's a sealed note to Cermak enclosed with the ledgers with full details. He'll need to be convinced to let us act as middle-men; the buyer insisted that the transaction be discreet, and Cermak is anything but. The new captain of the guard is also a problem, with the nose of a bloodhound and an irksome disregard for bribes. I think we'll earn our finders' fee on this one, as well as a tidy cut of the profits.

This place is an untapped well of profit; that much is certain. However, while I'm not one to look a gift horse in the mouth, I have a feeling that the real wealth of Daemonheim is yet to become apparent to us. The soldiers' behaviour is stranger than anything I've seen, and the new captain's trying far too hard to keep us out. The request for cadavers stinks of necromancy to me, and there's something unnatural in the air here. I've heard whispers in the night, and my dreams have been feverish. These are all signs of opportunities for men with our unique contacts, brother, and getting a foot in the door will no doubt yield some intriguing secrets.

We could live out our days as rich, fat, happy men running this route, but - of course - ours is a higher calling. There are rumours that there's been a shift of power here - that no-one's seen their leader (a man known only as "Bill") for some time. Despite his absence, something about him keeps those mercenaries skulking in the tunnels like rats, and keeps their captain sniffing at our heels. My gut tells me that digging just a little deeper will give us the glimpse of Daemonheim's filthy black heart we've been waiting for.

If not, hey - we're only getting richer. If it's not too far off my path, I might stop to deliver some of this mail to the lonely wives of those stalwart soldiers. Another service I'm only too happy to provide.

In his name, always,

I'm sorry that it has taken me so long to write. I can only pray that this reaches you, as I'm forced to rely upon the merchant, Hearthen, for its delivery, who may well decide that it's easier to consign the letter to a ditch. Ordinarily I wouldn't send such a man within a league of you, but these are anything but ordinary times.

I hope that you reached your father's farmstead safely, and that you have been able to reconcile yourself to him. He's a good man, and he’ll not leave you destitute.

Do you remember Captain Esken? He was killed in a cave-in last month. We almost thought the old devil was immortal, but his death really brought it home: you can be a veteran of a hundred battles, but Daemonheim takes whoever it wants, when it wants to.

Damnedest thing, though, is that the lord master promoted me to captain in his place. Me – old Sergeant Toma - with a commissioned rank! Lieutenant Artus, who's been waiting for Esken to cop it since we arrived, looked like he was going to burst. Gods only know why I was chosen, Freya, but the master’s always done right by me. Some say he’s mad: that one day he’ll loosen the leash on the necrolords, or that he’ll just keep us down here digging and fighting ‘til we rot. I can't explain it, but when he looks down upon us and addresses us as his retainers, Freya, we all stand silent and rapt by his words. You never heard him speak, but if you did you'd understand. When Bill speaks, we know that there’s a plan – even if we don’t know the particulars – and we would all die for him.

It's been a week since we saw the master. The dissenters have started to whisper that he’s abandoned us, but I’ve kept them from stirring up too much trouble so far. I know he’ll return, and we’ll be here holding the fort when he does.

They say that field promotions can be rough, and it’s true here more than anywhere. I'm responsible, now more than ever, for the lives of the men and women under my command. Rather than fighting by their side, though, it's my job to tackle threats from within – ill-communicated orders or short-sighted troop distributions; in-fighting within the ranks; exploitation by those vultures of merchants; and the unnatural designs of the necromancers from the floors below.

I hope that - despite everything, and despite the things you said when I had you taken from here - you'll be able to forgive me. This place would have been your death had you stayed, and I’m not just talking about the way the necrolords looked at you. Daemonheim itself sought to take you as it takes all who dwell here, one way or the other, and as you grew gaunt and pallid, and the lustre began to fade from your eyes - it was the only thing I could do.

I wish dearly to return to you, love, but I cannot - not while my lord needs me. He has decreed that I maintain order here until he returns, and that is what I must do. I fear that I cannot explain to you why I must stay and serve him in a way that you would understand; just know that on the day he returns and absolves me of service I shall leave this place and come to you. Guthix willing, we shall be together again, and start a family as we once hoped to. In the meantime, rest and become well, but be sure to say nothing of me or of Daemonheim to anyone, for the safety of us both.

Until then, Freya, I can only promise you that I will serve my lord master, and hope that that makes you proud to call me husband, even as it keeps us apart.

With my love, always,

Cermak, I shall require the following on the next available caravan. I am led to understand that this is within your means to provide, and I am willing to compensate you accordingly:

Ensure that the cargo is unspoiled. While I am aware that violence is a necessity when procuring the goods that I have requested, I know that your ilk are prone to certain gratuitous excesses which could prove detrimental to my research. If the live specimens must be kept silent, then do not cut out their tongues. Gagging them, or – at most - sewing shut their mouths, must serve instead. I have instructed the merchant, Hearthen, that the cargo should be inspected upon receipt, and to tender payment only upon confirmation that my requirements have been met. Note that he and his clerk, Prospero, are my representatives in this transaction, and will be handling the logistics of the delivery, which must be treated with the utmost discretion. My reach is long, slaver, and my reprimand will be severe should any harm come to either, or should they be hindered in their task.

Prove that you can be trusted by completing this delivery according to my specifications, though, and I may have further opportunities for a man such as yourself in the future. Let us just say that a gulf of power has emerged here - one that I fully intend to fill. Once it was our lot to languish in a madman’s shadow, but that is no longer the case. There is power here, and this is a chance to establish my dominion over this stronghold and to expand Daemonheim’s interests across Gielinor.

Not everyone shares my vision for Daemonheim’s future, though, and the time will come to choose a side. Serve me well, Cermak, and more than just coin will be yours – powerful weapons, forged from metals the like of which you’ve never seen, suited to the hand of a great warlord; implacable forces to bolster your own, leaving your men free to claim the spoils of battle rightfully theirs. Fail me or betray me at your peril. My agents are unhindered by locked doors or armed guards, and when they find you, slaver, you will lament the day that you did not simply bend knee as my vassal.