Spirit of the Pass 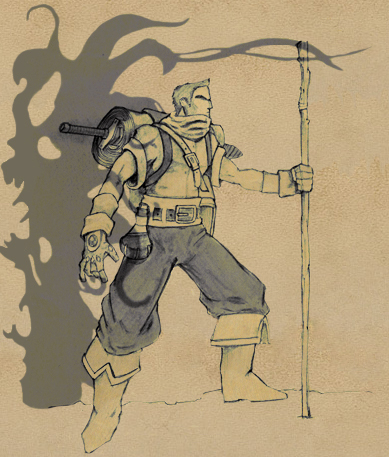 The origin of this text is unclear. It speaks of a tunnel system known to exist west of Ardougne, though here in Misthalin we hear precious little of what lies inside. If even a fraction of this tale is true, I shudder to think what else might stalk the hidden corners of RuneScape.

You must be careful walking through the Underground Pass: it is filled with the spirit of Zamorak. You can feel it as you wind your way round the stalagmites - like an icy chill that threatens to penetrate the fabric of your being. Not so many travellers come down here these days, but there are some who are still foolhardy enough.

I remember seeing one such warrior going by the name of Randas, he stood tall and proud like an elven king, but that same pride made him vulnerable to Zamorak's calls. Randas's worthy desire to be a great and mighty warrior also made him corruptible to Zamorak's promises of glory. Zamorak showed him a way to achieve his goals, by appealing to that most base and dark nature that resides in all of us.

It starts as a whisper in your ears. Dismissing the sounds as the whistling of the wind, Randas steeled himself against these forces and continued on his way. But the whispers became moans, at once fearsome and enticing, like the call of some beautiful siren. "Join us!" The voices cried, "Join us!"

"Why fight against your nature?" They asked Randas. "Your greatness lies within you, but only Zamorak can truly unlock your potential."

In time these voices became visions. Visions of human armies, wasted by some unseen hand. Their bodies lay heaped together like some amorphous mass of mutilated flesh. And standing on top of this great heap stood Randas, a bloody sword in one hand, and a glazed look in his eyes. A destroyer of his own people... but a victor all the same.

Upon entering Zamorak's Tower it is said that Randas performed a ritual that would alter his spirit forever. Kneeling down at the sacred altar, he spilled his blood into a silver chalice and offered it to Zamorak. Randas began to chant the words of ancients: strange, twisted noises from deep in the bowels of eternity.

This was the spirit of Zamorak, pulsing through his body like the cry of an animal from some unholy sacrifice. His whole form began to convulse as charges streamed through his muscles. But the power was too much for his mind; it was as if the forces of darkness were a black cloud expanding inside his head. As he witnessed yet more ghoulish and nightmarish visions, the world outside seemed to disintegrate in front of him.

The world was still there - it was Randas's mind that had been broken. And now if you get lost in the tunnels you might just stumble into Randas. A shadow of a man, his eyes are hollow, with no life behind them. For Randas is part of the asylum now, just one of the many walking dead. A human vegetable, he wanders the tunnels in a zombie state, oblivious to all his surroundings. Ask him about Zamorak and he will tell you as much as he can remember. He may even tell you more about the ritual that he performed.

Just don't let curiosity get the better of you...