From the RuneScape Wiki, the wiki for all things RuneScape
Jump to: navigation, search
This official Postbag from the Hedge is copied verbatim from the RuneScape website. It is copyrighted by Jagex.
It was added on 27 November 2008.

Christmas may be coming, but a few are avoiding the general hysteria to bring you postbag letters. Not that the Chaos Elemental puts much thought into his shopping; last year he gave me a squirrel on a stick, a dog training book and a donkey tail. What could that possibly mean?

In last month's Postbag (no.34) you wrote this, "Letter dictated to Postie Pete, as Juna is unable to write herself. This is probably something to do with her not having any limbs. P.P. "

Something I could not fail to notice is that, along with the inability to tell good jokes, Postie Pete seems to be lacking in limbs. He doesnt even have any place to attach the limbs even if he could grow some. Since this is so, how could Postie Pete write the letter that was dictated to him?

P.S. I said pizzled and I meant pizzled. It's like puzzled only with an "I" instaid of a "U".

Dear MacBurl2 the magnificently odd,
My skull more than makes up for my lack of arms. You want an omelette? I can whip one up with a head butt to an egg, a shot from my patented butter cannon, and a spatula wedged into a nasal cavity.
The same goes for writing: I grip the pen with my molars and 'dance' to the rhythm of the words. I have a certain flourish that my calligraphy teacher tells me is South Kharidian.
Juna, on the other hand, prefers to communicate verbally and I have to write it down. I get a mugful of tears (and a straw) for my troubles, so it more than balances out.
PP
P.S. – I tell good jokes, thank you very much! I came up with a doozy for the Wise Old Man last week and tea squirted out of his face. Let's see what you think of it:
Q – What happens if you right-click and 'Use' your own belly?
A – Nothing intestine happens
Have some of that!

I was just wondering why your castle is designed to withstand an attack from Al Kharid, while the goblins and other foes to the west can get in through the back door?

You have all the cannons pointing towards the River Lum (which provides alot of protection itself, especially if the bridges were razed), not to mention your cannons aren't able to fire west because of the castle walls blocking their path (except maybe the ones near the bank).

Then we have those doors. Goblins are abundant to the east and I'm not sure of your relations with them, but, you have other foes between Draynor Village and you, such as a black knight. Not to mention that Lady Keli could try to kidnap you as she did with Prince Ali. She's close enough and it wouldn't be too difficult with that back door, now, would it?

You have to remember, dear friend, that Lumbridge Castle is very old – much older than you or I. It dates back to the middle of the Fourth Age, when the most pressing threat was from the east, not west.

You still raise a valid point: we have few defences against the creatures of the west, and are over-reliant on the protection of the White Knights. That does not mean that we should put weight on the threat of goblinkind, however: relations have certainly improved. The treaties signed with the Dorgeshuun seem to have reduced the hostility of nearby goblins. I have a feeling that there will be further positive changes in the New Year.

As for the back door: well, we would be in danger if it was not there. My aunt visited last Christmas, and my troubled chef once smoked out the castle: that's two times that I have used the back door, which is more than enough to warrant its existence.

I hope I have helped. If you need an anti-dragonbreath shield, don't hesitate to call.

I ask you, why do all walks of life fear you, I also have other questions that must be answered. such as....

Is it scratchy trotting down the rock laden path of life?

Does your hamster ever wonder if you are feeling depressed?

Tired of being misunderstood?

Wishing for a fun time?

Wondering why adventurers not unlike myself send Postie Pete on perilous journeys?

From your nearly insane pal,

Ralvash is gone; Muspah, famous, sleeps with the fishies, if fishies frozen could be. That's where the shadows are shadowed, and even the delvers don't dare. Bizarre: one day it's almost time for a shadow to shift - and a shadow to open its unblinking, empty eye.

I recall with great pleasure those days that you, of course, do not. Nial was there, but he was different then, just like you all. Time changes us all, as do curses. I pray you forgive me for this. B.Y.

What's in Raktuber this year? A white bird, as the etymology of ornithology goes. That's not where Bandos is, he's in a rage, old chum, old temple, old plots, old power. Old is as old does - I'm old, sometimes, so I should know, but I do not.

This great, high, uplifted land, Corrupt and Natural, and all things bound within the soul of the slayer - whose land is it? The red and the green, but not entirely like or unlike the ramblings of a mad, dead man.

Recently, I discovered something that may interest each of you, the best firemaker, fletcher, and woodsman respectively. In a strange other realm, I have discovered a new type of tree, the Cursed Magic tree. Now, burning logs from this tree produces a bright white flame. I was wondering if it would not be possible to create bows and longbows from this wood. Imagine the possiblities!

We have known about these cursed and magical trees for some time; in fact, we each have a sorry tale to tell about them. We would not advise you to try any of these out, dear friend:

Ignatius - I gave a pile to my good friend Blaze, who used them to light a beacon. Before he could put the fire out, the smoke had formed into the shape of the King Black Dragon! Varrock was thrown into a complete state of panic, and poor Blaze had his wages docked.

Hickton - I created a short bow with it, which was simple enough, and volunteered my apprentice to take the first shot. At the instant before it hit its target, the arrow swerved back and headed towards my apprentice. Luckily, it was my apprentice's birthday and he was wearing a large, steel '18 today' badge. The lucky boy.

Wilfred - A friend of mine acquired several logs to make into an axe, which he swung at a nearby willow tree. The axe then flew out of his hand and into the clouds. That night a storm came, the lightning hitting his crops. In the morning, he looked out of his window and saw a message in the corn: "Next time, I'll huff and I'll puff".

We hope that you can learn from our mistakes, and avoid the accursed magic trees at all costs.

Yours imploringly,
Ignatius, Hickton and Wilfred.

It has been years since I stopped you from destroying Varrock. Every once in a while, I will see a noob slay you, and it has inspired many questions. Why are you so much weaker than even the lesser demons? Why don't you ever train and improve your combat level? Why do the dark wizards never learn that it is pointless to summon you? How would you destroy Varrock when your combat level is 28, and the guards and warrior women defending Varrock are levels 21 and 24 but in far greater numbers?

One of your slayers,

You clearly have much to learn about destroying cities. To cause widespread fear, you don't need strength; you just need the impression of it. Look at me - I am terrifying to behold! No fool could be blamed for fleeing from me. Few stick around to face me in battle once they have beheld my horns and my wild-eyed stare.

There will always be meddling upstarts, though. They'll wander into the sewers, pick up some old key and get wild delusions of grandeur. Without Silverlight, I tell you, I would be free to enslave, set fire to things, fill people with pure terror, et cetera.

I have but one piece of advice for you: boo! (I bet you jumped.) Use it wisely, for it holds great power.

I must be off; I have not given up on my destiny to rule Varrock! Mwa ha ha!

I love Fist Of Guthix, well I really love the free runes for my magic experience anyway. But I have a question for you. When I've been wandering around collecting my charges I've noticed several pillars around the edge of the arena. I thought nothing of these at first, but upon noticing them the second time, I noticed they have the symbol of Saradomin, the 4 pointed star. Now I know Fist of Guthix is a minigame given to us by my favourite god, Guthix, so why is Saradomin's symbol here? Did Saradomin's followers sneak past you while you were sleeping or something and vandalise your minigame?

I'd love to know what happened.

The Fist of Guthix was never meant for anyone but Guthix. Unfortunately, while Guthix sleeps, there are plenty who would disagree - gods, Mahjarrat and men, all after its power. I'd expect nothing less from humans, feeble creatures that they are, but Saradomin should have known better. I recall when Saradomin's knights came to claim the Fist, and to make the caves their temple. Their efforts were frustrated, of course, and, as Saradominists often do, scrawled the symbols on the walls as they left.

I have been guarding this cave for mortal lifetimes and have encountered many who seek the power of the Fist. Thankfully, in His wisdom, Guthix deemed it necessary to further safeguard the Fist, tasking Crux Eqal with its protection. As such, those who pass me are still far from acquiring it. In the meantime, I'm left to babysit a bunch of power-crazed, thankless mortals and keep them from causing too much damage. *sigh* 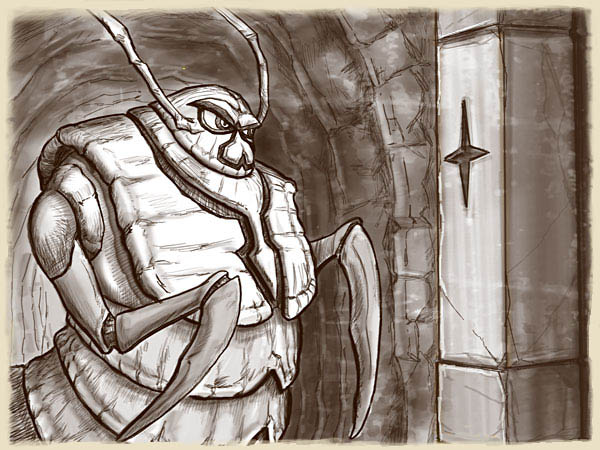