I just wanted to say thanks for all the Halloween fun. I only managed to find 1 mask myself but thats ok. I had a blast!!! It was such a rush finding the mask that it made my day :-) 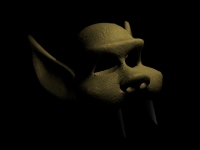 It gladdens my heart to see that it hath brought you so much pleasure. And to think that some people have said that these masks should have been deposited straight into their bank accounts. Now where's the fun in that, I ask you?

Many are the times that Your praises have flown from my mortal lips. In You there is only but good. Please answer my cry, dear Saradomin! Your blessings to Your world are vast, and they continue to grow with the addition of Halloween Masks to the world. They have added a new spice to the world previously unexperienced! But please tell me, oh Holy One, those of us who live in North America are put at a disadvantage because the Masks seemed to be introduced during the prime of the day for European players. Must this happen every time? Are North Americans doomed to purchasing one of these treasured relics instead of living the joy that comes with finding one?

Ah yes, Europe and North America. Some say that these are different worlds, and its true that I do sometimes have trouble locating them on the Runescape map. But Saradomin's mercy crosses all boundaries, and verily these masks were dropped across a span of fifteen of your hours - such was the dedication of our distributor.

I have wondered many-a-year if the rules apply to the place you obvisouly lost control over... The Wilderness... I mean whenever I attack someone they say very vulgar things and some times your good friends will turn on you even after they swear on their mothers graves... I think it is plain that Zamorak rules the wilderness 100%, look at the two evil churches, obviously dedicated to your brother. I suppose if that is his territory then you can not help what goes on there...

Swearing on their mother's grave and then attacking you? I wonder how meticulous you are about your choice of friends. But you're right in saying that the Wilderness is essentially a Zamorakian affair. It seems that even the most good-natured of players gets the urge to decapitate his fellow man occasionally. And so the Wilderness enables them to do this. Of course, swearing is still not allowed in the Wilderness, and if someone is verbally offensive to you, please use the 'Report Abuse' button.

If you're not a great cook, and you want food where do you go? The kebab shop of course! What's this, I can only buy one at a time! Why should this happen? Wasting our life buying kebabs one at a time! Why not make it like any other store? Just have an inventory. Please great lord! I have spent long hours burying bones for you! Don't waste any more of our time! We could be using it to pray to you! 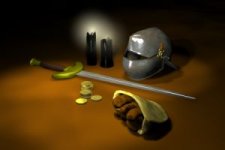 More than one kebab at a time? That would be just decadent. Runescape is supposed to be a land of finely-tuned warrior poets, not grease encrusted slobs!

Besides, the kebab seller has to prepare them individually, so that you can always be sure of its freshness. Especially since goblin meat doesn't tend to keep too long.

In the wonderful world that you have created, people eat so much, I would think that they would have exploded or at least become extremely swelled. They have no way to 'lose' the bulk that they have taken on (besides having part of them hacked off by a monster). I think that if your world was to be better, you should have some kind of digestive system in the people who inhabit RuneScape, and outhouses or something so that the digestive systems can fulfill their purposes.

That is all I have to complain about today. If you will not provide us with outhouses, maybe Zamorak will prove to be a mightier being, and give us a place to 'go'.

Ah yes, Zamorak, god of bowel movements. I'm sure he would be flattered. But I'm glad you share my concerns about obesity. This is why there is so much walking in Runescape - to keep players in the peak of fitness. So I don't think that out-houses are such a pressing concern, although I have noticed that the lake by Taverley has started to look a bit muddy recently.

I understand the far reaching complications of this request. I would be willing to pay a great sum, or complete an arduous task for a one time privilege. The ability to change ones' name, without starting over. There are many such as myself, who in their beginning naivety chose a whimsical or inappropriate name. Having risen to a respectable level in all skills, I find myself longing for an equally respectable name. But alas, perhaps I deserve to pay for the follies of my youth.

U R A Lamer

You should not feel ashamed, Mr. Lamer. Well, maybe just a little bit. But your name is your identity and your birthright, so wear it with pride. The important thing is what your name represents. Are you an untrustworthy scammer, or a vigorous pursuer of truth? The former will be shunned by his peers, while the latter is embraced. And so the permanence of names is of great significance. Whatever your name is, you must make a name for yourself!

To the god of all things,

Ok I really need to know about the kind of a computer we need for the new graphics. I play Runescape on a really slow computer, but Runescape runs really well, I have about 250 mega hertz. Now when these new graphics come out, will my computer support it? I know I'm not the only one asking if we need a brand new computer to play the new Runescape.

Fear not, my good friend, your facilities will indeed be sufficient for the upgraded version.

As all of us on Runescape know, you and your brother Zamorak quarrel quite a bit. If there was no evil, then there would be no reason to be good and thus you get evil. If everything were evil, it would corrupt itself thus leaving a space open for good. This makes the quarreling pretty pointless. So I suggest that there be a god of neutrality to maintain the balance and not let either side become too powerful.

The likelihood of neutrality is one of a studious manner pretty much. You have no ambitions, you do not side with others, you are a loner. Only when things get out of hand do you take sides with the minority temporarily. The representative color would be red (white good, red neutral, black bad, akes sense). This would prevent, if not stop, the quarreling between you two. Mind you, I've been getting terrible migraines lately because of you two.

Behold, such a god exists - my brother Guthix. He doesn't really do much; that's neutrality for you, I suppose. But the druids seem to like him.

I just wanted to thank You for your mercy and the rune 2 handed you told my friend to give me!

Hmm... I don't remember telling your friend that, actually. But I wouldn't want to suggest that your friend has been hearing voices. So let's just call it an act of faith.

What is up with all the new magic stuff???? This is giving an unfair advantage over the pures. They cannot pillage the wild and kill off the weak and defenceless (well it's not as easy lets say).

And that was the idea. But I think that its more of a case of redressing the balance, not giving an unfair advantage. Indeed, some mages are saying that we haven't gone far enough. Perhaps omnipotence does not extend to pleasing everyone.

I was wondering if you could reply to my question, I need answers...

There is a strange man I see wondering over your world from time to time he is called null he seems normal until you look closely his combat level is 1! I thought that the people of your world start off at a combat level of 3, so how is this possible. When I added him to my contacts list even though he was logged on he appeared offline! And finally why does he disappear and reappear? Thank you my great god Saradomin.

Null is a mystical guardian who protects you when you first enter new areas. He is a passive and benevolent force, and as such his combat level never rises above 1. He appears and disappears in order to attend to the needs of all those who may require his protection.

Until next time, my friends,