A True and Concise History of the Discovery of the Runes

Extract from Conversations with a Mage, by Samael Leynes 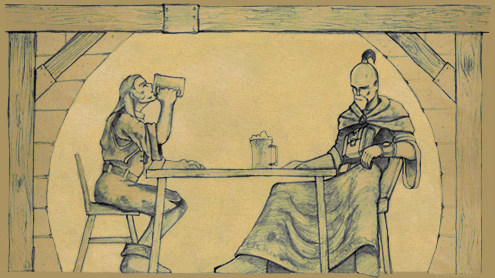 The power of the runestones is well known to us now, and even children are taught a very basic understanding of the workings of magic and their advantages in defending our walls. This memoir shows that this was not always the case, and that in a mere few centuries our understanding has increased... but so have the dangers of those who might misuse them.

The question seemed simple enough, yet the old man looked at me with a strange mixture of pity and contempt. I had asked him where the runes that now shaped our daily lives had come from. I waited patiently for his answer, apparently ignoring the look upon his face, for I was sure that his previous eloquence and his tales from before mankind meant that he favoured me. Eventually, with a jarring cough, he began to speak to me of the runes which had allowed man to use the Arts Of Magick to assist him.

"As my time on this plane draws to an end, the treachery of the evil followers of Zamorak still burns within my heart and mind, as I know that such knowledge as those like me have gained will forever be lost to the ages. I have not much time, yet must tell what I know concerning the runes and the dangers that their treachery hath brought upon our fair world.

"I am one of the few left alive who remember the time before we had the runes; when man fought man for food; when there were no havens from the creatures that seek to destroy us as a race. Yes, I remember still the times before men and dwarves considered each other allies, and only the bravest of heroes would venture beneath the ground - lest he fall foul of the wrath of the dwarves who had claimed that as their own.

"I remember the names of the kingdoms before they were kingdoms, of the men who ruled before there were kings. I remember how the discovery healed old wounds between families, made mankind safe in this world for the first time in our memories, and made even the humblest of men able to walk with a king as an equal... Yes, I remember..."

I waited some small amount of time after these words, for I did not wish to impose upon the old man too much, for we had talked at this inn for a long time of many things - which I have recounted to you in this humble tome, dear reader - but I was obliged to hurry the old man, for it had been a long night already, and I was afraid for his health as he coughed heavily, and he seemed lost in his thoughts.

I purchased another mug of ale from the innkeeper, and prompted the old man for an answer to my original query.

"An answer you want is it, boy? And you have fresh ale? Well, we will see... but you must know that sometimes a simple question gets not a simple answer...

"I remember my father, a smith of the highest standing, first telling me as a boy that a man from the north had madest a discovery of... well, there are some secrets I fear I must take to my grave in case they fall into the wrong hands. Yet I will say this; this man of the north had found something of great importance that required a great deal of study, and had bought some paltry supplies such as hammers and chisels from my father, which is how he knew of it.

"Even as a young boy I had an interest in this world in which we dwell, and this discovery surprised me. That night I stole away from my parents' home in the land we now call Misthalin so that I might join this man in examining his findings. What had he found? Patience, boy, I am coming to that - but I cannot reveal too much, for evil walks this land, and if it knew all of the secrets which had been discovered all of man would suffer in ways you cannot imagine... let us just say, that this man from the north had discovered Magick.

"I was not the only one who had come to see his discovery. A group of people, perhaps two score in number from all over this realm, and of all ages and tribes had heard similar rumours. They were as consumed by curiosity as I and had come to pledge themselves to exposing the secrets of this discovery. I cannot describe to you the awe and wonder we all felt when first the man from the north demonstrated the power he had discovered... To strike a foe with a mighty gust of wind at will! This feat is almost commonplace nowadays, and seen in brawls all over the lands, but back then... it was as though we had gained the power of a god!

"And as we trained and studied, our powers grew stronger and more unbelievable... I saw men moving objects with just the power of their mind, others turning useless items into the purest gold!

"But these skills and powers were not the greatest discovery that we made. It was discovered that we could take these powers and magicks, and bind them into solid objects which we called rune stones, for each had been marked with the rune symbol of the Magick which we had bound into it.

"These stones could then be given to someone who had not studied nor trained with our group - and the Magickal energies bound within them could be released at will. We all agreed that the discovery, and the Magicks it had allowed us, and our ability to store these magicks in compressed form as stones, required much investigation, far more investigation than was possible with just the small group that we were... so we vowed to all return to our homelands and spread the message of our discoveries, so that we could gain more followers to assist us in our research.

"When I returned home, my parents scolded me for my thoughtlessness and selfishness in leaving them with not a word of explanation - yet the looks on their faces when I showed them the powers I had achieved through my studies! When I smelted some of my father's ore in my hand without the need of his furnace, he almost collapsed with wonderment, for it was then that he saw what I could see when I had left home; that this discovery was the future of our people on this world.

"Only my mother gave me words of caution, which I did not understand then in my foolish youth; that there was danger in trying to match the gods, for the gods are jealous and do not want mere mortals having powers such as they possess... Many times since then I have thought on her words and wished I had understood them as I do now."

Again the old man's story seemed to be unfinished, and again he seemed to be waiting for some hidden signal to proceed. Having become used to his ways in the hours I had spent with him, I rose to fetch him more ale, but he snapped out of his reverie with a wave of his hand.

"No, boy, I need no more ale. I have had my fill for this night, and all the ale in Misthalin cannot wipe away the memories of treachery and bloodshed that I have, no matter how much I sometimes wish they could. Just indulge an old man his memories of loved ones long dead for a moment, I shall return to my tale when I am ready."