A Call to ARMS 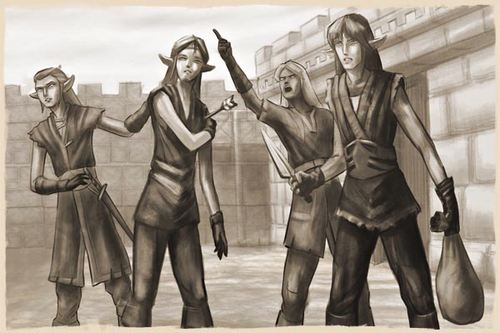 This week has been a record one for commander applications. There must be something in the air; I can barely put quill to journal before I’m interrupted by a fresh-faced whelp wanting spoils of war.

Which reminds me: these new commanders have no end of questions, the most common of which are about the races that fight for ARMS. I’m a busy man, with no end of work to do, but the following three journal entries should shed light on how the elves, dwarfs and goblins came to Mobilising Armies.

Can there be a better feeling than looking back on a choice – a big, sea-troll-sized choice – and knowing that you absolutely made the right one? If there isn’t a name for that feeling, there darn well should be.

Saunders and crew had just finished the recruitment room, and the scaffold was being hauled down. I’d taken myself up to the top of the officers’ tower for a prideful look – thought I’d treat myself – and swung both legs over the side for a cup of tea and a dash from the hipflask. It was then that I spotted a kid scramble under a workbench; at first I thought it was one of the workmen’s podgy brats, but the legs and arms were javelin-thin.

The kid rolled out a ball that glimmered like crystal, and shattered in a flash of light. A dragon - a hulking thing, some twenty feet tall – clambered out of the soil and roared like thunder. You couldn’t blame Saunders for scrambling out of camp with nothing but his footprints behind him.

This is where that sea-troll-sized choice came in. I could’ve hollered out and got everyone back, told them the dragon was an illusion, but calmness overtook me and I waited to see what came of the nonsense.

A scruffy pack of cloaked strangers made their way into the camp behind the dragon. One lifted the kid by the hood as if he were a tomcat, while the others went straight for the bank. They wasted no time in filling their bags with anything they could grab – from money to the bankteller’s lunchbox.

The thieves had a natural ease to their movement, but their actions were desperate. I’ll admit, my first guess was runaways from Yanille or Ardougne, till one dropped its hood and pointed ears sprang out. They were elves, by Guthix, hopped straight from the storybooks and into my command centre!

As the Kandarin saying goes, “Shoot first, and yank the arrow out later”, so I stuck one of the larger elves with a shot and yelled out a warning: “Stop where you are or I aim for the head.” That seemed to stop their grifting, so I gave them a choice: “Stop lifting from my bank and I promise that, seven days from now, you’ll get a cut that’s ten-times what’s in those bags.”

For a moment it looked like the opportunity would drift away, but they chattered in elfspeak and sat down as one, waiting for me to come down and offer terms. I’m not going to count my chickens, but they’re joining us for our first commission. We’ll see if they have the fighting spirit.

A long time ago, when I was in my twenties, I explored the islands to the south-west: captained a crew and island-hopped from rock to rock. It was then, on one volcanic crop, that we came across some goblins, wiry and desperate, who were being terrorised by a dragon. We negotiated with their leader, Shuddergob - bled him for every gold coin he had - and agreed to take them elsewhere, where they could infight and prosper. That was some thirty years ago: I’d never thought that I’d be visiting them again.

That was till earlier this week; word was spreading that the humans in the Command Centre were planning a coup. They got an idea to storm the officers’ tower, take over the command centre and up their cut from 50% to 100%. Fools hadn’t thought of inviting the elves to their coup, but their threats were still very real. I offered them an 80% cut of all future commissions and they took it, but we both knew the deal was only temporary.

I fabricated a commission to the goblin island. Fishing villages were being raided, I said, and the villagers would only accept human mercs. It being the first commission at 80% rates, virtually every human took the job, so they loaded their ships and made their hungry way to the island.

When they were all ashore and camped on the beaches, the goblins hit them. On the lush greens of the island the goblins had multiplied in their thousands. Swathes of green faces scuttled the ships first and then swarmed the tents. The mercs put up a fight, but they eventually fell; the goblins were simply too many and too relentless.

When I arrived later, I was greeted by Shuddergob. We talked about that time, thirty years ago, and I asked about the events that day. He said that his goblins had lost many, and that the battle would be chatted about for years. I asked if I could offer him payment, he said that “the battle was our reward”.

“The battle was our reward”...that’s a rare thing to hear in mercenary circles. I offered them a place at Mobilising Armies on the spot – 20% of all spoils – and, as I write, the human barracks are being cleared for their arrival.

No conversations at the table, only food. It’s always been that way, and, bless them all, the troops know it too well.

I was settled at my table, and the cooking rotation had delivered an opening course of thin snail. My mind was filled with the usual – the kings of the north, cut demands, spy reports – when a commotion came from the kitchens. Hungry goblins, I guessed.

It all quietened down and the chef came in with a gormless smile. He was followed by two goblins, chuckling away beneath a huge pie that they lugged to my table. I must have been distracted: I remember thinking that the pastry was barely cooked, yet the size of the pie only registered a few seconds later.

As they settled the pie down, something shifted heavily inside and a gauntlet punched through its top. An arm tore a large flap of pastry from pie to floor, and a beleaguered face with a long, red beard appeared. The man from the pie clanged in his armour as he struggled to stand upright, barely four-foot in height. A dwarf!

“Confound you all,” the dwarf blustered, chompy meat in his beard. As it later turned out, the dwarf had demanded to be brought to my dinner table, no matter what cost. The chef obliged.

The dwarf took some calming down before he gave out his name, occupation or anything resembling an intention. He was sent by the Supreme Commander of the Black Guard to broker a deal that brought trainees to the command centre. Here, they’d learn the basics of warmongering in the mercenary squads, and then return to Keldagrim as battle-hardened warriors. Each trainee would get 20% of any spoils, while the Black Guard and ARMS would split the rest down the middle. “Fair deal,” I said, and we shook on it.

The dwarf was given a banquet, as much to celebrate as it was to punish the chef. Still, you have to admire the chutzpah of putting a dwarf ambassador into a pie. I may give in to a curious whim I have, and recommend that the chef begin Junior Cadet training. The boy – Mal, I think his name was – has a cavalier attitude and reminds me, not a little, of a very young Lord Marshal Brogan.