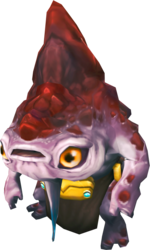 The traitor is a goebie hiding in Nemi Forest. He is unaggressive and is very easy to kill. When killed, he will respawn on the same spot after a few seconds, unlike other monsters in the Nemi Forest.

One of Trinks' possible tasks is to kill the traitor, rewarding 15 reputation. The Nemi Forest can be quickly reached if the player has 750+ reputation by asking the ranger at the entrance of Kanatah to guide them to the forest entrance, else run west towards the entrance.

If the traitor is stuck behind an obstacle, leaving and re-entering can respawn the traitor in a different spot.