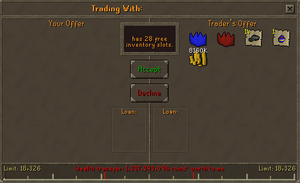 The Trade limit is a mechanism in the trading system that prevented players from making trades considered to be too "unbalanced", that is, where one of the two players involved in the trade gave much more than they received according to the item's value in the Grand Exchange. This limit only affects new accounts that have never subscribed to a RuneScape membership in the past, and is limited to a 25k limit disparity between trade and Grand Exchange values. Jagex originally introduced it as part of measures to curb real world trading. As a side benefit, the trade limit also discouraged and mostly eliminated "hacking" other players' accounts. The Trade Limit now only affects accounts that have never subscribed before.

Jagex's intention to implement the limit was announced in the Trade and Drop Changes update on 10 December 2007,[1] as part of several other updates, to allow players to prepare for the limit. In fact, the trade limit was already applied to new players who signed up after 10 December 2007, as well as various other "high risk" players. The limit was instituted for all players in the Unbalanced Trade Removal update on 2 January 2008.[2]

There is still a trade limit to players who have never been a member before. They can not make a trade where they give away more than 25,000 coins per hour, to prevent players from selling gold. This was introduced on 22 November 2011 to combat Gold farming. The limit only affects accounts created after this limit was introduced, which have never had membership, however this trade limit is lifted once the player obtains membership and the limit will never come back once membership is activated on the account. The limit will never be removed until the player subscribes. Some players have criticised about this limit, saying that it is unfair to require the purchase of membership in order to remove a trade limit.

To allow for gifts or assistance from higher-levelled players, there is no restriction on how much money a new player can receive.

The announcement of the limit resulted in much criticism from players, and was a factor in the well-known Pay to Pk Riot (though that was primarily in protest at the changes to the Wilderness, which coincided with the trade limit announcement). Many players disliked the update, as it prevents larger gifts from being given to others, and reduces the amount of help that can be provided to fellow players. On 3 January 2008, shortly after the implementation of the limit, the Unbalanced Trade Riot occurred as a result.

Some players also used the Party Room, in very quiet worlds and having totals of just enough value (<50,000 GP) that it would not be advertised throughout RuneScape. However, this became less effective when the Party Room became usable only on specific worlds.

Another method was to look for items that have a large discrepancy between the Grand Exchange value and the player market value. For example, various items have a relatively high Grand Exchange value compared to their street value. Players often used these items to "balance" a trade. This practice was known as junk trading.

A third alternative would be to use the Wilderness, on quiet servers. There the player that wants the items can either kill the player that has them, or allow monsters inside the Wilderness to make the kill, and claim the items after they are dropped. This is risky due to the chance of other players interfering, and killing both players involved in the trade. But only a maximum of the players trade limit will be dropped on death. For example, if a player with a 25k trade limit is holding 100k and is killed then 25k will show up for the killer but the 75k will be lost (not even the person killed would be able to see it).

On 21 December 2010, a petition was created by Jagex asking players whether or not they wanted the Wilderness and free trade to return. In 24 hours over a million people voted to have the two return. In the second phase of the vote, a referendum was made with "Yes", "No", and "Don't Mind" options. The referendum was closed on 14 January 2011, with 91% of players voting yes. On 1 February unrestricted free trade returned, making the trade limit obsolete.