From the RuneScape Wiki, the wiki for all things RuneScape
Jump to navigation Jump to search
For the area of the ports interface, see Player-owned port/Interfaces#Resources.
Not to be confused with port resources.

Trade goods are resources found and used exclusively within the Player-owned ports minigame. They are obtained primarily from special voyages offered by adventurers, but standard voyages can sometimes offer them too. Trade goods are used to make rewards usable outside of ports, including scrimshaws, Tetsu, Death Lotus and Seasinger's equipment. The relevant trade goods can also be used to repair superior versions of the equipment sets, instead of using coins. In order to use trade goods, relevant Eastern scrolls must be collected.

All trade goods can be obtained in any region of the Eastern lands except The Arc and The Skull, with the number of goods obtained per voyage increasing with the difficulty of the region. Each adventurer has an associated trade good, which will often be offered as a special voyage when they are in port (in an amount corresponding to the region). Duo voyages offer slightly higher amounts of one trade good. Each adventurer's story usually ends with a reward of a large amount of a trade good, and each trio storyline ends with an even larger amount of trade goods. The Trader also offers a small number of one trade good per day, in exchange for a large amount of port resources. The ports chest in The Faraway Place where Things are Kept can give 10 Ancient bones, 20 Plate, Lacquer, or Chi, or 50 Spice.

A maximum of 250 of each good can be stored at once. If a successful voyage is checked while the associated trade good is close or at 250, the excess is wasted.

The Grand Exchange value of each trade good in coins when crafting each tradeable reward is given by Calculator:Other/Trade goods. 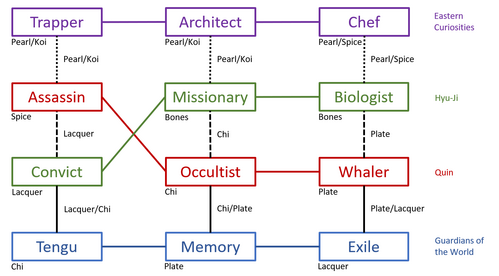 Relationships between joint adventurer voyages in Player owned Ports, and the trade goods that they offer.

All trade good voyages (standard and single-adventurer) in a specific region are for the same number of trade goods, except for spices, which offer more per voyage due to the consumable nature of their use.