From the RuneScape Wiki, the wiki for all things RuneScape
Jump to: navigation, search
The Old School RuneScape Wiki also has an article on: osrsw:Tortoise
This article is about the Tortoises near the Tree Gnome Village. For other uses, see Tortoise (disambiguation). 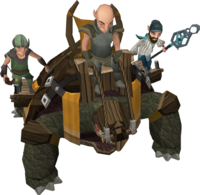 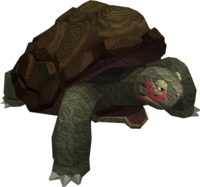 The tortoise (Testudines Giganteus) are trained tortoises used by the gnomes in battle. They train in the pen north of the Tree Gnome Stronghold swamp. Trainer Nacklepen is in charge of their combat development.

Tortoises are very good for training and making coins at the same time. A full inventory of tortoise shells can bring in about 1277808 coins. Tortoises have very high life points and low attack, but good defence. They are weak to air spells. With a fair variety of drops, they are arguably better than yaks or rock crabs for training purposes, but since they are a lower level than the latter they are not commonly used. It is recommended for training only if you can hit high enough to effectively damage them, particularly if you choose to use ranged or melee. The best way to damage them is to use an air battlestaff or better in tandem with the best air spell you are capable of casting, as this provides a cost-free way of killing them with a decent damage rate. An alternative for higher levelled players is to use a Polypore staff with the Polypore Strike spell, due to its cheap cost per cast.

When fighting the tortoise with riders, the three gnomes take turns attacking the player. The mage uses a bluish spell, the archer shoots steel arrows, and the tortoise attacks with the driver holding the reins if the player is within their meleeing range. Protection prayers aren't very effective because the riders use all 3 combat styles; however, the tortoises hit hardest with melee, so that prayer will stop the most damage. When the mounted tortoise is slain, the riders will all attack the player that killed it simultaneously. This can prove somewhat dangerous for low levelled (under 80 combat) players, as these gnomes are fairly accurate for their level. If the player runs away, however, they become unaggressive, and eventually disappear when the tortoise respawns.

There are two mounted tortoises at the Battlefield of Khazard.