From the RuneScape Wiki, the wiki for all things RuneScape
(Redirected from Tormented Demon)
Jump to: navigation, search
? (edit) 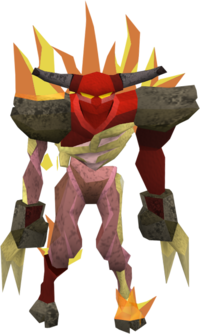 Tormented demons are massive demons summoned and controlled by the Mahjarrat Lucien. They first appear in the Grandmaster quest While Guthix Sleeps, wherein Lucien uses Daemonicas Abhoris to summon two demons in the Ancient Guthix Temple and place them into a state of perpetual physical agony, healing their bodies as they burn and making them extremely hostile and aggressive. After the quest is complete, a total of six tormented demons may be found in the Temple. The ability to have them assigned as slayer tasks by Kuradal, Morvran, and Laniakea can be purchased using 50 slayer points after completion of While Guthix Sleeps.

Tormented demons possess a number of formidable powers. They can attack with all three combat styles, shield themselves from damage, and even use protection prayers. They are often killed (either by single players, or teams of players) for their unique drops, namely dragon limbs, used to forge the dragon crossbow (which is in turn used to forge the Ascension crossbow), as well as the pieces of the dragon platebody. They also drop the dragon claw and off-hand dragon claw, both as part of the same drop, which are used to craft chaotic claws. Aside from these, they have a number of other valuable drops, such as charms, herbs, salvage and clue scrolls. The demons commonly drop rune salvage so is it a good idea to bring a charged spring cleaner set to high alch or disassembly mode to process the salvage, negating the need to fill the player's inventory.

Despite being demons, these monsters do not take increased damage from holy water, although it does remove their fire shield. Additionally, dwarf multicannons cannot be set up in the demons' lair. They can be easily killed with two combat styles, or one if a player uses a steel titan.

Damage being absorbed by the fire shield

Tormented demons attack with melee, Magic, and Ranged, though they only use one style at a time. They can hit up to 1150 damage with any of these attack styles, and with very high accuracy; their attacks often hit players regardless of Defence level or armour quality. Fortunately, protection prayers reduce this damage to 1, so prayer switching is an effective and essential tactic when fighting them. Tormented demons change attack styles every 16 seconds or so; when they do, they rear back and roar, creating an area-of-effect Magic attack that can hit players behind cover. Like Crystal shapeshifters, the tormented demon's affinity values change accordingly depending on the combat style used; magic demons are weak to bolts, ranged to stab attacks and melee to fire spells.

This shield can be taken down for 60 seconds by a successful hit with Darklight or Holy water. Each non-zero hit from either weapon resets the 60-second counter, and both auto-attacks and abilities work. (Note that for the purposes of their prayer-switching, hits through the fire shield are counted without the damage reduction.) The shield cannot be taken down with Darklight while the demon is using Protect from Melee, or with holy water and Protect from Ranged. If the player has upgraded Darklight after completing Dimension of Disaster, it will act as a powerful weapon, and the demons will take more damage before using Protect from Melee.

Finally, the six tormented demons in the Ancient Guthix Temple are reasonably close to each other. There are two groups of three demons; one on the north, and the other in the south. While they usually don't wander across to the other side, tormented demons will always focus on whoever they attacked, only changing aggression when their original target leaves the server or is attacked by another player. It is recommended to avoid fighting multiple demons at once, and if the player is attacked by multiple demons, attempt to tank one or two of them while trapping the remaining behind the walls and pillars that dot the edges. Demons in the temple always start with magic attacks and have the Protect from Melee prayer active.

They may be placed in the Sunken Pyramid through an Ushabti. This also requires obtaining a soul from the Ancient Guthix Temple beforehand. The primary advantage of this is that players may choose other weak monsters such as chickens for prayer restoration, resulting in extremely fast and cheap prayer renewal, and a very safe environment with extremely fast access. However, there are a few drawbacks; two can be placed at most in each room (due to the unique respawn timer of the pyramid), as three or more demons in the same room can be extremely dangerous, and the demons spawn with a different combat style and overhead prayer.