From the RuneScape Wiki, the wiki for all things RuneScape
(Redirected from Tolna's Rift)
Jump to: navigation, search
The Old School RuneScape Wiki also has an article on: osrsw:Tolna's rift

Tolna's rift can be accessed during and after completing A Soul's Bane. It is located east of Varrock and west of Silvarea.

This dungeon is designed to be efficient for players training their combat skills. The monsters here have fairly high life points and relatively low defence. However, as the area is designed purely with combat training in mind, almost all of the monsters do not drop any items. This does, however, mean that players can stock their entire inventory with food without having to worry about having to drop some should they get an item.

This can be an excellent area to level Ranged for players who have finished Animal Magnetism and have Ava's accumulator or Ava's attractor. Creatures can be ranged from the central lobby without retaliation. As the device will collect arrows as they are fired, Range can be trained without fear of damage or having to pick up arrows. Magic can also be trained this way here.

There are four major areas of the dungeon each consisting of quite strange monsters.

This room contains Fear reapers and is only recommended for those with combat levels in at least the high 40s. Fear reapers are level 37-40 and have 1450 LP. They are weak to fire spells. 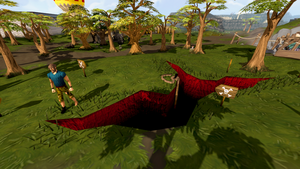 This room contains level 39 Confusion beasts. They cannot poison as they did during the quest. They have 1400 LP. They are weak to fire spells.

This room contains Hopeless Creatures. At level 47, with 1700 LP, they are the strongest monsters in the dungeon. They are weak to fire spells.

The first thing players will notice upon entering the dungeon after completion of the quest is that they enter a lobby-type area, allowing access to all 4 rooms immediately. The dungeon is much smaller than during the quest, and more easily navigated. In the anger room, the weapons rack and rage meter are no longer present. The creatures will be noticeably stronger than during the quest, and the bosses will be gone.

Tolna was a young boy when he left his home in Varrock in search of a more exciting life away from his parents. He travelled northeast of Varrock, but did not make it far. Shortly after leaving his home, Tolna discovered a strange crevice in the woods northeast of the city. As he moved closer to investigate, he fell in, where he would be imprisoned for the next twenty five years.

Tolna's emotions caused the rift to change. His emotions, which were mostly anger, confusion, fear, and hopelessness, were manifested in the caverns' chambers. Tolna descended further into madness and ultimately lost his humanity.

Upon completion of A Soul's Bane Tolna tells that, while trapped, he could feel an evil power emanating from the area. He believes this is what caused him to go insane and what made the dungeon twist to his emotions. While this may just be an illusion he suffered during his insanity, this disturbingly fits with the presence of the Dig Site to the south. The Dig Site was once a massive temple complex, part of the mighty Zarosian city of Senntisten. The city was three times bigger than modern-day Varrock and reached as far as Edgeville, another old settlement of the Zarosian Empire.

This information has been compiled as part of the update history project. Some updates may not be included - see here for how to help out!
Retrieved from ‘https://runescape.wiki/w/Tolna%27s_rift?oldid=35541161’
Categories:
Hidden categories: