From the RuneScape Wiki, the wiki for all things RuneScape
Jump to: navigation, search
Loading...
NPCIn combat 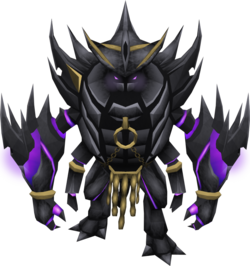 The TokHaar-Hok are the strongest caste of the TokHaar race, whose role is to relay messages from the Elder Gods to the rest of the TokHaar. This TokHaar-Hok is encountered during The Elder Kiln and The Brink of Extinction.

TokHaar-Hok hosts the Fight Kiln minigame after completion of The Elder Kiln and is fought during the Brink of Extinction, after which he can be fought again in the Fight Cauldron.

Being one of the most important TokHaar, this TokHaar-Hok relayed messages from the Elder Gods to his brethren. After the departure of the Elder Gods, with no purpose, the TokHaar have taken up combat to pass the time, with this particular TokHaar-Hok often serving as a leader of sorts.

When some TokHaar decided to remain in the mountain, Hok was one (if not the only one) of the TokHaar who were angered by their "defiance", as it went against everything they knew. This TokHaar-Hok and the others could have easily attempted to force them (now TzHaar), but did not do so, taking no action. This was due to the fact that if they died outside the Kiln, they would not be reborn, and the TokHaar did not want to risk losing themselves forcing the TzHaar to return, as they were both equally proficient in combat.

TokHaar-Hok would only watch as his brethren continued to fight in the Kiln, along with other lava monsters that stumbled into the Kiln and were reborn in the lava as TokHaar.

Eventually in year 169 of the Fifth Age, the Kiln was visited by a human and another unknown rock creature. TokHaar-Hok immediately forced the human into a series of fights, desiring a fight with outsiders after fighting his fellow brethren for millennia. The adventurer was able to repel the TokHaar attackers, which delighted TokHaar-Hok, as he had never seen such strength before.

He explained the history of the TzHaar and TokHaar races, saying that the TokHaar were made by the creators of Gielinor to create the world's mountains. When they had completed their task, some of them returned to their precious Kiln, however some of them split apart from the TokHaar and made their home in the mountain above the Kiln. This group is now the TzHaar society. TokHaar-Hok exhibits a great disdain for the TzHaar race, referring to them as being corrupt and weak, because their ambitions to create cities undermines their original duty to create mountains. TokHaar-Hok also explains that he despises the TokKul-related aspect of the TzHaar culture, as it also goes against the abilities of the life-giving lava that flows from the Kiln, which can rebirth the TokHaar with their memories and abilities, rather than simply passing them on to the next generation. Whether his opinions on the TzHaar race are shared by the other TokHaar is unknown.

When the player explains why he has brought the Ga'al to the Kiln, TokHaar-Hok allows the Ga'al to be submerged with the TokKul of TzHaar-Ket-Yit'tal, the late Champion of the Fight Pits. Once this is done, TokHaar allows his battle-starved brethren to attack them, and gives the two a 'head-start' to escape with. This did not go well, as they killed some of the pursuing TokHaar, causing them to be lost forever as they died outside the Kiln, which he regretted.

At the end of the quest, Ga'al-Xox, having turned his back on the Tzhaar society due to their refusal to accept his wishes on not continuing the TokKul infusion process that was performed on him, turns to TokHaar-Hok, who sympathises with Ga'al Xox's disapproval of the process and decides that action needs to be taken against the Tzhaar.

TokHaar-Hok shows a strong love for combat, referring to it as its race's glorious sport. Ultimately, he, similar to the Tzhaar, feels no negative emotions toward dying in combat as he implies that there is glory in fighting. He effectively is addicted to combat as he pesters the player throughout the quest to participate in combat.

TokHaar-Hok explains his race and the TzHaar

The following takes place during The Brink of Extinction.

After Ga'al-Xox killed TzHaar-Mej-Ak in the Kiln and fled, TokHaar-Hok took Xox into confidence and informed it of the plan he had made. As the TzHaar had abandoned the tunnels once it was apparent the TokHaar were not attempting to sabotage the TzKot-Zo (a circuit of sacred lava that allows the volcano to be sufficiently heated), Hok ordered the TokHaar to sabotage the conduits, blocking up the lava and causing the volcano to cool down. The creation of the Ga'al were an unexpected and unintended anomaly, however.

The adventurer, tasked by TzHaar-Mej-Jeh to pursue Xox, soon discovered the TzKot-Zo and two blocked conduits. Jeh ordered the adventurer to restore the flow of lava, and as they did so, several TokHaar appeared to defend it, but were all slain by the adventurer. When they arrived at the third conduit, they found Xox attempting to pull the mechanism to restore the final set of lava that would restore the volcano's temperature. Xox explained to his friend of Hok's plan to force the TzHaar back into the Kiln, and requested that they help him. The adventurer believed him, and helped restore the flow of lava. However, as this batch of lava was extremely sacred, Hok himself appeared, disappointed in Xox. Seeing the human however, prompted Hok to challenge the adventurer himself, wishing to test their mettle in combat. Despite his best efforts, he was defeated after a lengthy battle, accepting his defeat and returned to the Elder Kiln.

Jeh, Xox and the adventurer returned to the Kiln, where Xox wanted to be reforged a second time to convince Jeh to implement changes. Hok agreed to the request, as long as the adventurer would return to the Kiln to fight, expressing interest to have the TokHaar hone their skills and search for the human's weaknesses. After this, Xox (and thus Ak) says goodbye to his friend and finally dies. Hok remains in the Kiln and is eager to offer the adventurer a rematch.

The Brink of Extinction[edit | edit source]

For strategies on fighting TokHaar-Hok, see this page.

TokHaar-Hok serves as the final boss of the Brink of Extinction, being assisted by various TokHaar summons, including TokHaar-Ket Champions, TokHaar-Xil and TokHaar-Mej. He attacks with a devastating punch melee attack capable of hitting over 2000 if Protect from Melee or Deflect from Melee is not used, and if not dealt with properly, will heal to full health. He is also capable of draining prayer, with each attack to successfully deal damage draining it by 30 points. During this fight the player will be assisted by Ga'al-Xox, although he is not capable of dealing much damage. 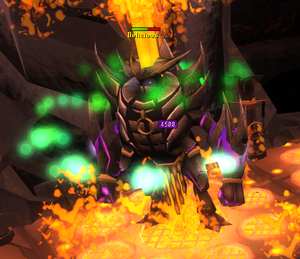 After reaching roughly half health he will begin to attempt to heal using the fountain of lava, exclaiming "We require healing..." or "We must regenerate...". If he manages to reach the lava, he will be healed by 5000 life points every tick. This ability can be prevented by using a stun ability or spell such as Backhand, Binding Shot, or Entangle. A player may also use a special attack on legacy mode to stun him. Ice spells do not work - only abilities. When stunned, he will exclaim "We...cannot move..." or "We...cannot regenerate...", and will be unable to heal via the lava for roughly 20 seconds.. When the period is over, he will exclaim "We will crush you utterly.", "We will tear you apart." or "Now we will crush you..." and the message "TokHaar-Hok is now able to heal." will appear in the chatbox. If he does manage to heal to full health, he will exclaim "We are whole!" and resume attack.

An unknown condition will cause him to exclaim "Embrace the Sacred Lava!" and teleport you into the lavafall. It is possible he teleports when he is healing in the lavafall and may use it multiple times in a row. The lavafall deals damage equal to 20% of player's maximum life point per 1.2 seconds. Player will take damage in lavafall even if TokHaar-Hok is not using teleport.

TokHaar-Mok Achievement is one of the Minigame Achievements. It requires the player to complete this duel with only Obsidian equipment. 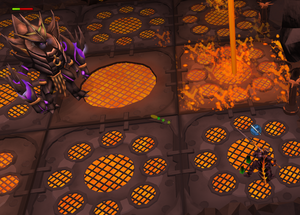 After the Brink of Extinction, players may have a rematch with TokHaar-Hok at the Fight Cauldron. While fighting TokHaar in the Cauldron, he can randomly challenge you to a duel.

He is significantly harder than he is in the quest, as he deals 25% more damage and reduces prayer 25% faster. To counter this, he has 45,000 life points instead of 50,000. He also summons more Tokhaar to aid him. He uses the same abilities as in the quest, but Ga'al-Xox will not be there to assist you.

If the player does not defeat him in the duel, he will be able to challenge the player during the Fight Cauldron again. If defeated, he will drop 16 Obsidian shards and an Antique lamp worth 20,000 experience in any combat skill level 80 or higher (Including Prayer, Herblore, Summoning and Slayer) along with any Obsidian shards obtained from the other TokHaar he summons. The rewards including the lamp are dropped to the ground and must be picked up before they disappear or before leaving the area.