From the RuneScape Wiki, the wiki for all things RuneScape
Jump to navigation Jump to search
For other uses, see TokHaar (disambiguation). 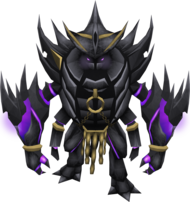 The TokHaar (meaning Sacred-Rock in the TzHaar language) were an ancient race of rock and lava creatures and the avatars of the Elder Kiln, one of the 12 Elder Artefacts, itself created by the elder god Ful. The TokHaar are not individuals; they are a single hive-mind existing within the sacred lava of the Kiln. This mind simply incarnates into different obsidian bodies to perform different functions. Removed from the Kiln, some TokHaar developed individuality and became the Tzhaar. Because the TokHaar were created to help build Gielinor itself, they and the TzHaar predate the arrival of humans and all other sentient species.

The TokHaar were created when the sacred lava of the kiln entered contact with sacred clay.[1] According to a TokHaar-Hok, the TokHaar were forged in the Elder Kiln by their masters to build the mountains of Gielinor.[2] The TokHaar-Xil were built to dig up the earth and rock, the TokHaar-Mej to blast the earth into a size the TokHaar-Ket could lift, and the TokHaar-Hur to craft the sediment into cliff-faces and slopes.[3] The TokHaar were responsible for creating hundreds if not thousands of planets, improving with each creation they made.[4] Their last masterpiece was Gielinor, of which they also made the planet's Elder Halls.[5]

When their work was done, they built a great mountain around the Kiln and remained inside "to await further instruction".[6] However, some chose to remain within the mountain, outside the Kiln, tunnelling through it to create cities and mazes. Those that did so have become the TzHaar.[7] The TokHaar dislike the TzHaar for this, believing it is weak, unnatural and against their true purpose.[8] The TokHaar did not take any action at the time, as they saw no point in killing their own kin. They simply waited inside the Kiln, fighting and watching as other beings stumbled and fell inside to the lava, their memories becoming one with the TokHaar.[9][10]

During the Second Age, a human gladiator named Zuk earned his freedom from the Zarosian Empire yet despite his freedom, he longed for battle. Learning of the Elder Kiln, he traveled to it and fought the TokHaar. The TokHaar could not defeat Zuk, making him the first outsider to defeat them. For his victory, Zuk claimed the Kiln for his own and presumably learned of Ful from the TokHaar. The TokHaar gave Zuk the title "TzKal", or champion of the fire. In close proximity to the Elder Kiln for centuries, Zuk ascended into demigod status.

During the God Wars, when Zamorak sought to expand his influence, his servant Perjour attempted to locate the Elder Kiln and recruit the TokHaar to his cause.[11] Perjour failed, however, as he was attacked and repelled by a guardian at the Kiln's entrance; though he was able to flee, he sustained heavy injuries and succumbed to his wounds days later.[12] Even if he had survived, the TokHaar would have refused to aid Zamorak, as they saw the lesser gods as false pretenders. Zuk heard of the war waging on the surface and asked the TokHaar to assist, but they were not interested in fighting a war not their own. The TokHaar appear to have forgotten Zuk over time as he was bound into the Kiln by Bandos.

A Plot and Rediscovery[edit | edit source]

Around year 169 of the Fifth Age, the TokHaar sabotaged the TzKot-Zo to cool the volcano down and hopefully force the TzHaar back to the Kiln as one.[13] The TzHaar did not return as expected, since most had forgotten about their origins and were very stubborn to change.[14] Their eggs began hatching as Ga'al, an unexpected anomaly.[15] A human adventurer, given one Ga'al, was asked by the TzHaar-Mejs to search for the Elder Kiln, believing it was their only hope. They found the Kiln and fought off many TokHaar. Their strength impressed Hok, who saw them as another outsider that had caught the interest of the TokHaar.

The following takes place during Brink of Extinction.

The volcano continued to rapidly cool, but the TzHaar were still unwilling to leave. The adventurer discovered that the cooling of the volcano was a plot by the TokHaar to force the TzHaar into the kiln. After defeating Hok, he promised to leave the TzHaar alone as long as he and his brethren could continue fighting the adventurer, which they accepted.[16]

With the return of Ful, the TokHaar rejoiced upon hearing the singing of their creator once more.[17] This time, Hok returned to the city to appeal to their ancient duties[18], but many of the TzHaar refused to return to the kiln.[19][20]

After Zaros opened the Codex, allowing shadow cacklers to emerge from the Shadow Breach, the forces present attempted to contain them with little success. Seeing that they were being slowly outnumbered, the World Guardian suggested requesting the TokHaar for assistance, under the reasoning that they would help defend the very world they helped build.[21]

Meeting in the Kiln, Hok was able to detect traces of shadow anima on the World Guardian and immediately realized something was afoot.[22] The World Guardian quickly explained the situation and requested that the TokHaar lend their strength to fight off the interlopers. Hok was unable to provide an immediate answer however, as he did not know if the Elder Gods had given the TokHaar a protocol that would instruct them to do so.[23] Seeing that Hok was taking too long to answer, the World Guardian decided to return to the Varrock Dig Site. In the end, and much to everyone's surprise, the TokHaar emerged from beneath the earth to help repel the invaders, effectively evening the odds in favour of the allied forces.

After Azzanadra sealed the Codex, he was transformed into a god for doing so. The TokHaar looked at the destruction the surface dwellers had caused by opening the Codex and saw the land tainted by shadow anima. Unaware that it was Zaros, a divine creation of Mah that had done so. The Elders, being in an observation state, deemed mortal life unworthy and Ful ordered the TokHaar to attack their former allies.[24][25] They attempted to destroy the Codex, but were repelled by the forces present.

Despite their betrayal, the TokHaar were unable to prevail. Taking immense losses, Hok ordered the TokHaar to gather what Tokkul they could to restore in the Elder Kiln, knowing that they would need their strength for the battles ahead.[26]

For their failure in battle, Ful ordered them remade in the Kiln once more, turning into the TzekHaar.