Thurgo is one of the last living Imcando dwarves (along with Ramarno), and is the master of Smithing found outside the Asgarnian Ice Caves, south of Port Sarim (fairy ring AIQ). Players who reach level 99 Smithing can purchase the Smithing cape from him for 99,000 coins.

In addition, after the Birthright of the Dwarves quest is completed, players can take a gilded dragon pickaxe to him to upgrade it into an Imcando pickaxe, provided that the player has all four parts (fragment 1, 2, 3, 4), as well as 1,000,000 coins on-hand and a redberry pie.

When first met, he is quite rude. However, when he is offered a redberry pie, he becomes friendlier towards the player.

Thurgo has lived for many long years as a renowned Imcando smith, until the Fremennik crusades of the years 42-62 during the Fifth Age due to their view that runestones should only be used by the gods. Thurgo was able to escape and moved to the peninsula south of Port Sarim. He hid his past as an Imcando dwarf and thus, many people believed him to be a simple dwarf; although it is implied more survived, he is the only one who willingly reveals himself.

He explored the caverns nearby, finding a source of blurite deep in the caves. He also discovered another entrance leading deeper inside, where he discovered skeletal wyverns. Initially believing them to be dragons, he took out his anti-dragon shield, only to be horribly burnt by frostbite. Thurgo was able to escape and placed a sign outside warning others to properly prepare themselves before venturing inside.

The following takes place during The Knight's Sword.

In year 169 of the Fifth Age, Thurgo was met by an adventurer seeking to replace Sir Vyvin's sword after his squire, Squire Asrol, had gone and lost his sword. Astrol told the adventurer that the sword was Vyvin's heirloom, created by the Imcando, and suggested to speak to Reldo to see if there were any survivors. The adventurer met with Reldo, who told them he had heard rumours that there might be some in Asgarnia's southern peninsula, and that they bring redberry pie with them.

The adventurer searched the peninsula and found a dwarf, asking him if he was an Imcando dwarf. Thurgo refused to reveal his identity, until the adventurer gave him a redberry pie. Thurgo then realized the person could be trusted and heard of the problem. He agreed to help as long as he had an idea of what the sword looked like. The adventurer brought a picture of the sword to him, who then requested some iron and blurite to create the sword. Upon being given the materials, Thurgo crafted an exact replica of the sword and sent the adventurer off, asking them to bring more redberry pie if they could.

The same adventurer soon returned to Thurgo as their Imcando reference to learn how to unlock the latent powers of the Shield of Arrav. Thurgo told suggested they go to Camdozaal's Sacred Forge giving them its location - the present-day Ice Mountain. Thurgo told them to bring a pickaxe and a light source, as although he had tried to enter himself, he was not a miner and did not have the right tools.

After Thalmund's Forge was discovered in Warforge, Thurgo, having heard rumours about Thalmund's work, occasionally visits the forge to look around before leaving.

During the 2017 Christmas event, Thurgo helps the player find Santa Claus after giving him a redberry pie. 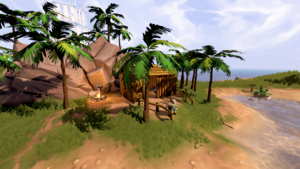