From the RuneScape Wiki, the wiki for all things RuneScape
Jump to navigation Jump to search
For other uses, see Three's Company (disambiguation).
Not to be confused with Two's Company.

Three's Company (saga) is the first ever Fremennik Saga. It may be started after finding a bear pelt on the frozen floors of Daemonheim. During this saga, you play as three characters; Ariane, Ozan, and Sir Owen, on a hunt for the antagonist Carn.

You can still complete the abridged version without 30 Attack, Ranged, or Magic. The following must be completed before entering the boss room to reach 100% completion and receive the unabridged tome (none of these would appear in the saga if you don't meet the unabridged requirements):

In order to begin, the player must first unfreeze Skaldrun. This is done by Dungeoneering on the Frozen floors (1-11) in Daemonheim, with Complexity 2 or higher activated. Skaldrun appears randomly in a room, frozen in ice. Kill all the monsters in the room so that the discussion with Skaldrun will not be interrupted. Light any type of fire adjacent to the ice or cast a fire spell on the ice. Talk to him. Choose each option. Once done, tell him to "Leave" and he will teleport to the surface. 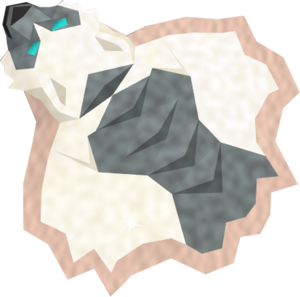 The dungeon map for the Three's Company saga

The memory fragment required to start this saga is a bear pelt. It will appear randomly on one of the frozen floors, but many players find it in the same room where Skaldrun was frozen. The bear pelt will be white and shiny, and will most likely catch player's eyes upon entering the right room. The bear pelt does not appear as a red dot on the minimap. Touch the bear pelt and it will disappear. After touching the bear pelt the player will receive a message in the chatbox stating to start the memory the player must talk to Skaldrun.

Bank all your items, including your Ring of kinship. No items can be taken into the saga. Find Skaldrun located west of Thok, Master of Dungeoneering, and talk to him about the bear pelt. If you quit the dungeon, you would appear next to Skaldrun. When you start the saga again, you could choose to start from the last checkpoint or from the beginning. The mechanism of checkpoints are not fully known, but it seems that the saga is saved when you unlock a door requiring a key to open. There will be no Smuggler to aid you. 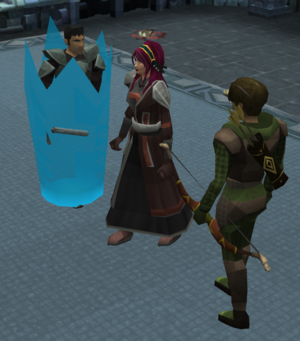 In this saga, the player controls Ariane, Ozan and Sir Owen, who are all needed to complete various puzzles. They are hunting the criminal Carn, who has great control over animals. The main objective is to complete the dungeon without any of the three heroes dying. Achieving only this results in the "abridged" reward. The saga also has an "unabridged" reward which can be earned by additionally completing four side-objectives.

During this saga, the player keeps their combat, Prayer and Summoning levels, but no prayers may be used and the damage output does not seem to reflect the player's combat level. Each of the heroes has 320 life points. Run energy is shared among the three heroes.

Click a hero's chathead on the left of the screen to switch to that hero. When a hero not under the player's control is at low life points and has food, the hero will eat automatically. If you switch away from a hero with low life points and food, they will eat automatically when they leave your control. Switching heroes causes the hero switched away from to regain 1 life point. This is not a very effective way to heal the heroes, but it does not require food. This also fully replenish your prayer points. While you cannot access the prayer interface during the saga, you can turn on prayers before entering and they would remain active.

Currently, there seems to be a bug that causes a hero to die when they reach very low life points (below 30 but not 0). Do not bring the heroes to such low life points if you can help it.

Four dusk eels will appear on the starting room's tables. Pick up some of them with each of the three characters. Using food on each other will cause the food to be eaten if the receiving character is low on health. Otherwise, it will be traded.

Just like regular Daemonheim dungeons, any items on the ground/tables will not disappear for the duration of the dungeon. 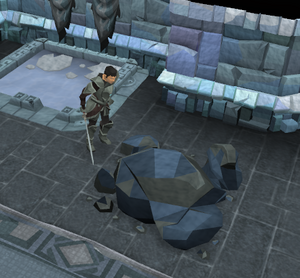 Sir Owen poking around the rubble

Control Ozan in order to press all of the pressure pads. If you attempt to use Ariane or Sir Owen, they will slip and fall while Ozan laughs at their lack of gracefulness. Players can utilise the Dungeon Home Teleport to get out the room easily. The puzzle is different for everyone and every time. Remember that you can slide diagonally. Try sliding from all points at all directions, and you will solve this fairly quickly.

Once Ozan exits to the next room the other heroes will teleport to him automatically.

The wolf and the two bandit rangers must be killed because the exit door is a guardian door. The bandits must be killed by ranged or magic as they stand on two separate platforms. It is still recommended that you control Ariane for this battle, as she can kill everyone quickly before anyone is hurt. Control Ariane and summon a cub skinweaver by using the gold charm on the summoning obelisk (this consumes the two heim crabs), and then switch to Ariane to talk to it.

Use Ariane to flip the tiles until all of them are yellow or all green. She can even force the tiles without being damaged too much. A guide can be found here. Enter the next room. It is possible to complete without forcing, but neither Ariane nor Ozan says much about it afterwards, and it does not affect the story at all.

If you do complete it, here is the dialogue:

Later, when entering the statue room, Ozan will say: "Oh, Ariane, I completely forgot: here's the 100 gold I owe you from earlier."

Ariane: "How did you smuggle money into this place?"

Ozan: "Smuggle money in? Yes...that's exactly what I did."

100 Coins will then appear in Ariane's inventory.

The room contains three mysterious shades. Killing them is not required, but they could drop dusk eels so it might be worth it. Grab the Green rectangle key. Return to the starting room and unlock the green rectangle door.

First, have Owen and Ozan "wait" on the two pressure pads. Use Ariane to go through the door, while the other two will be trapped in place. You cannot switch to another hero. Trying to do so would result in a message that you have to solve this alone.

Right-click "Get-premonition" on any strange crystal. You will see six crystals releasing puffs of smoke in a sequence (south red, west blue, west blue, north green, west green, south yellow). As getting the premonition from the crystals multiple times does not incur any penalty, players can watch the sequence for several times and write it down (It is possible to get the same crystal twice in a row). It might be a good idea to turn on re-sizable mode or full screen mode with low detail in the graphics options. The former two options allow full view of the room, while the area would be brighter in low detail, making it easier to spot a puff of smoke emitted by a strange crystal.

Once you have the sequence, touch the crystals in the same sequence. Owen and Ozan will be able to move again. If you touch the wrong crystal, it will shock you with a small bolt of energy dealing some minor damage.

You cannot switch heroes while solving the puzzle and you cannot teleport out of the crystal room. The only ways to heal is natural restoration or eating food brought (unless you use the rest option which can still take a while too). If you try to touch any of the crystals without getting the premonition, you will always be shocked. Grab the Crimson triangle key. Head back to the starting room and unlock the crimson triangle door.

Here, simply kill the two bandit rangers and the wolf. Again, it is advised to play as Ariane here because she can kill them much more easily. 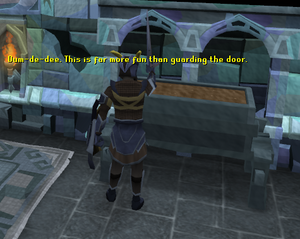 The guard happily harvesting his potatoes.

Use Ozan to talk to the guard. Choose the following options when presented with a choice at different points in the conversation:

The guard will then walk off to the nearby farming patch to grow some potatoes, leaving the door unguarded. If you watch the guard long enough after talking to him, a number of things may happen to his potatoes, including: exploding, turning into a giant rat, making him sick when he eats it, and there also being only one potato when he harvests them.

Use Sir Owen to move the statues so that they match the immovable statues. When the first statue is moved, Sir Owen says the statues are lightweight and taunts the other two. Ozan attempts to move a statue, and Ariane wisely decides not to when Ozan got himself hurt trying to do so. It might be worth telling the other two characters to "wait" out of the way. Otherwise they can get in the way of the moving statue. Once the puzzle is solved, three doors are unlocked, leading to three more rooms. There is an agility puzzle room to the North, the pickaxe room to the east and Guardian Room #3 to the south.

Enter the northern room. Use Ozan to move through the obstacles. Pick up the broken longsword lying on the ground. It crumbles to rust at your touch, leaving nothing but some ore. Then go back to the statue room.

Enter the southern room, and kill the two rangers and the warrior with Ariane. Go East. 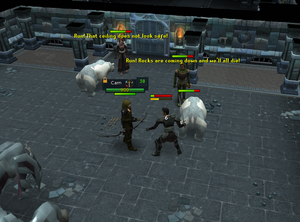 After unlocking the door, attempt to enter. The player will have to choose three times which character speaks with Carn. The choices only affect the dialogue, not the outcome. Enter the room, and attack the two arctic bears. You will need to kill the two animals first before being able to damage Carn. The hypnotised behemoth will begin dropping rocks from the ceiling. This can be avoided by standing the characters in the safe spots indicated by the pillars and rugs on the floor.

Once Carn is defeated, choose any of the characters to end the saga. Skaldrun gives the player their reward, the Three's Company book, or books. Upon reading the books, they disappear and the player gains some experience. 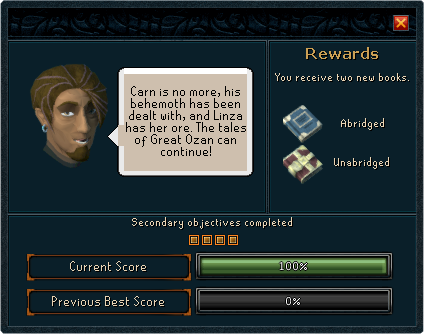 For 100% score (all of the secondary objectives), as well as the abridged book reward, an unabridged book, which when read gives:

The saga is always re-playable regardless of the completion percentage, with a maximum reward of 224 dungeoneering tokens (reduced for every time it is completed, not completion percentage; resets daily). However, the player will only receive the Abridged/Unabridged rewards the first time that 100% of the objectives are completed.

Three's Company (saga) is not currently required for any quests or miniquests.