Thok Your Block Off

From the RuneScape Wiki, the wiki for all things RuneScape
Jump to: navigation, search
For other uses, see Thok Your Block Off (disambiguation).

Thok Your Block Off is a Fremennik Saga. Players are able to take control of Thok, Master of Dungeoneering, again, as he attempts to defeat his brother in a battle of brawn.

To start the saga, you must find a rock and twine bundle within the first set of the occult floors of Daemonheim (floors 36-40). These can be taken to Skaldrun outside of Daemonheim to begin the saga, which continues the story of Thok after the events of Thok It To 'Em.

Thok and his brother, Marmaros, are exploring the dungeons of Daemonheim, when they encounter "Bone Face". Thok manages to get his sword stuck in "Bone Face"'s head, and decides to pursue him through the dungeon, while Marmaros breaks off to go a separate route, the brothers agreeing to compete for the most kills.

At the top of the screen is a kills meter, showing the number of enemies Thok has slain compared to Marmaros. If you quickly attack foes, you should be able to easily beat Marmaros by the end of the saga. You must have at least 4 kills over Marmaros for 100% completion.

Venturing through the dungeon[edit | edit source] 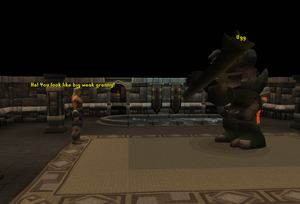 The brothers arrive in the start room. Bone Face runs into one room while Marmaros runs into another. Thok is still angry about losing his sword, so he chases after him. The foes are easy to kill. However, it is highly advised to target the mages as they usually hit around 80-100 on him with ease and the other foes (except bosses) rarely deal damage that high onto him.

Venture through the dungeon, using keys when necessary. These keys take you to various places that end up to be dead ends with surprises in them. At several points, you face "reinforcement" rooms. These rooms continuously spawn enemies until a game message tells you it stops. The rooms are straightfoward and easy, so it should be easy. When all the enemies in a room are killed, Marmaros stops fighting until you begin to fight again.

Marmaros talks to Thok at a point along the way, surprised that Thok's skin is green, but taunts Thok and maintains that he will win the kill count competition because Thok's sword is missing. 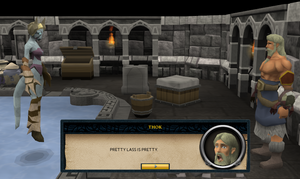 At one point, Thok encounters a dead end room containing a Promethium rock and a soulbell plant. Harvest both resources and use them on the spinning wheel in the same room to create the "Best Thing Ever".

In another room later on, Thok encounters "Pretty Lass". Thok blunders up trying to talk to her, but ends up giving her the "Best Thing Ever". She returns the favour by giving Thok a Fishy cake, which allows him to catch more fish from fishing spots. The Fishy cake cannot be eaten, and cannot be dropped.

This is required for the unabridged version.

Continuing through the dungeon, Thok again encounters Marmaros, who mentions that he has lots of fish, and encourages Thok to try the fishing spot behind him. Thok uses the fishing spot, but states that he only finds crabs, which results in Marmaros running off laughing. Shortly after, Thok finds Mini-marm, from Thok It To 'Em, as well as a new "lady friend", Mrs Mini-Marm. They are required for the unabridged version. Thok equips the crabs as weapons, which greatly increase his attack power. The crabs also help at times dealing small damage to enemies, who yell out random phrases when hit. The second checkpoint is also reached once they are collected.

At some point shortly later, a Mini-Mini-Marm plops into Thok's inventory.

Thok also encounters a Ferret of Doom behind the crimson diamond room (note: the key for the crimson diamond room drops in the room after the one with the locked door), which Mini-Marm and Mrs Mini-Marm tries and spur him onwards to, but several Ferret of Doom's friends quickly appear, frightening Thok into running away. Due to Thok's fear of ferrets, clicking on the door causes Thok to run several spaces back, with a chatscreen of him yelling "NOOOOOOOO!". 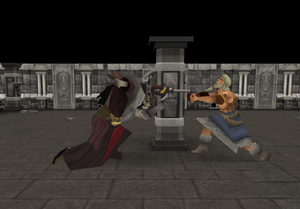 Thok getting his sword back.

Thok finally finds "Bone Face" again, who is hiding on top a pillar. He sends the Gravecreeper and the Hobgoblin Geomancer ("Derek") to attack Thok, as Thok's attacks are unable to hit them. He also adds a Gluttonous behemoth to the mix, so that Thok could attack something. The Gravecreeper and Derek do not attack you when they are summoned until the behemoth is attacked.

However, the gluttonous behemoth attacks the hobgoblin geomancer and the gravecreeper, using them as "carcasses" to heal itself. Thus, when Thok attacks the gluttonous behemoth, he can deal damage to all the bosses. Both "carcasses" are killed within 3 hits of the boss. Thok's hard hits are good enough to deal major damage on the boss, allowing it to kill the Gravecreeper and "Derek" faster. Don't block the boss or get too close to the supporting bosses, as this may cause a few delays if this happens. A bug can possibly occur, making it impossible to finish off the behemoth (repeatedly getting the boss to 1 hp, but never killing it). This can be circumvented by quitting the client and starting again from the last saved checkpoint, just before the boss fight.

Once killing them, Thok knocks "Bone Face" off the pillar, and takes the sword out from his head, despite the cries of the other. Thok decides to let "Bone Face" live, on the contract that "Bone Face" is never seen again. 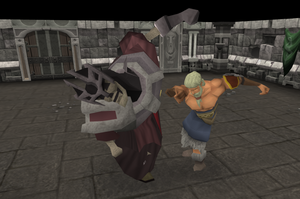 Thok leaves the room, gets disoriented, and re-enters the room, finding "Bone Face" just after he left him, who is now singing praises of his life. Enraged that he's seeing "Bone Face" after he told him to never be seen again, Thok punches "Bone Face", killing him. Thok then releases Mini-marm and Mrs mini-marm at the pool he found them at, who then begin to form a crab army. A Brute then comes into the boss room, trying to wake the "Bone Face" up, whom Thok killed. Pretty Lass is in the fish room, and she quietly waits for Thok to come so they can have a date.

There are 3 checkpoints which allows you to retry small segments instead of the whole saga.

Try to have around 5+ at the Crab Room because the next few rooms are more difficult. If you need to reset to the last save point, drop combat (hide behind something) and log out. If you have a good kill count before the Boss Room checkpoint but messed up on the way there kill everything except the melee enemy, hide behind the fishing pool and log out.

An abridged book, which when read, gives

Together, with the above rewards, an unabridged book, which when read, gives