From the RuneScape Wiki, the wiki for all things RuneScape
Jump to: navigation, search
Thok's sword? (edit)

Thok's sword is the sword that Thok uses during the Thok It to 'Em Fremennik Saga. The sword will automatically give adrenaline on killing an enemy. 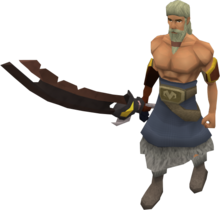 Before the Evolution of Combat update, the sword was unique in regards to the fact it was a 2-handed sword held in one hand, and also due to its useful variations of special attacks.

The former special attacks imitated those of the Vesta longsword, dragon longsword, the dragon 2h sword, dragon scimitar, and a unique headbutt attack that could deal over 1000 damage.