A thingummywut is an enormous monster which first appeared in the quest Love Story. Long before that, however, thingummywuts have been mentioned by an eccentric wizard working in the Wizards' Tower, Traiborn. Players who talk to him find that he has an obsession with thingummywuts, but does not go into specifics about what exactly they are. He does say that he believes they reside near the Wizards' Tower, and are responsible for some sort of unspecified mischief.

Other people dismiss Traiborn's claims as crazy. Traiborn has discussed their existence as well, but is unable to make himself understood.[1]

It was not until the Wizards' Tower Robbery that any proof was given to Traiborn's claims. When the Wise Old Man and Zenevivia attacked the Wizards' Tower in order to restock their supply of runes, Sedridor and Wizard Grayzag (replaced with Wizard Taloram for those who have completed The Void Stares Back) fought against them while Traiborn runs away, down the bridge connecting the Wizards' Tower to Draynor Village. Zenevivia defeated Grayzag's (or Taloram's) imps, so he teleported away, leaving Sedridor alone. The Wise Old Man and Zenevivia were about to defeat him but just then, Traiborn returned, announcing that he had found a thingummywut. 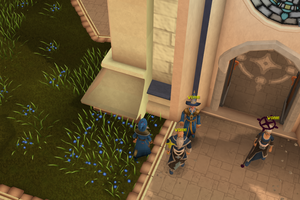 A first person view from a thingummywut as it attacks the Wise Old Man and Zenevivia.

Traiborn sets an unseen object on the ground and runs back to the Wizards' Tower. Blue flames appear, similar to the ones which appear when a familiar is summoned by a player. The camera shifts to the perspective of the thingummywut as it emerges from the flames, so it is impossible to see what it looks like. The thingummywut towers over the Wise Old Man and Zenevivia and attacks them with Earth Surge, casting the spell many times more rapidly than any other player or non-player character can. Overwhelmed, the two robbers retreat.