Thieving is a members-only support skill that allows players to obtain coins and items by stealing from market stalls, chests, or by pickpocketing non-player characters (NPCs). This skill also allows players to unlock doors and disarm traps.

Items that increase success are an Ardougne cloak (although the Ardougne cloak 1 and 2 enhance pickpocketing only in Ardougne), Gloves of silence or the Trahaearn exoskeleton set. However, equipping a Snowball, a salamander without the tar needed, or a (cross)bow without projectiles makes it impossible to accidentally attack an NPC.

To help increase the success rate, players with 62 or higher Summoning may choose to summon an Abyssal lurker familiar and use Abyssal stealth scrolls, which provide a +4 visible boost to Thieving.

Prifddinas is occupied by the various workers that roam around the respective Clan districts of Prifddinas., which can be auto-pickpocketed. The pickpocket action automatically continues without needing to reclicking until the player is caught.

After the player has been caught three times, they will not be able to pickpocket any more NPCs from for 20 minutes. During this time, their pickpocket option will disappear, and a red circle will appear above their heads. Players may pickpocket workers from another Clan district during this time, which are governed by a separate cool down.

These must be equipped to confer their benefits. Superior versions work in place of lower-tiered versions.

Black ibis outfit are an experience-boosting set that may be found during the minigame Pyramid Plunder or may purchased using minigame tokens from thaler currency. The set consists of four pieces - a mask, body, legs and boots - each piece provides a 1% stackable experience boost across the board, and wearing the full set raises this to 5% in total.

Trahaearn exoskeleton set is a 4-part outfit made from Exoskeleton headband, Exoskeleton torso, Exoskeleton legs, and Exoskeleton bracers which, when worn completely, gives a 25% to avoid being stunned and damaged while pick pocketing or plucking the Desert Phoenix, a 25% chance to avoid being bitten when looting urns in Pyramid Plunder and a weight reduction of 2kg per piece equipped (8kg total). It can be worn instead of the Black Ibis outfit and Gloves of Silence for their bonuses if the player has unlocked them.

Thieving yields Camouflage fragments after 70 Thieving. They are gained at five-minute intervals, for 1200 fragments hourly. The rate is double at 99 Thieving, triple at virtual level 120, and quadruple at 200 million experience.

At 80 Thieving and 20 Invention, the player can use 3600 fragments to manufacture a random camouflage piece among those that they do not own. With five pieces per outfit, one can expect to obtain full camouflage in 45 hours. Once all pieces are obtained, it is impossible to manufacture any more. 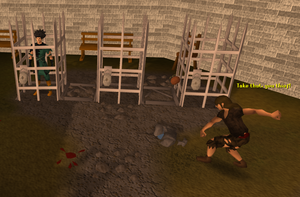 Although the examine text of the Thieving strange rock says "borrowed from a pocket", it can be obtained by picking pockets, stealing from stalls, and stealing from chests. Strange rocks are used to construct the Dahmaroc statue in the Shattered Heart Distraction and Diversion.