Therragorn is the last surviving white dragon. Like the rest of her kind, who were hunted to extinction for their hides, Therragorn's children and mate included, she is capable of travelling between worlds and isn't as aggressive as conventional dragons. She bears a deep grudge against Kerapac and his fellow Dragonkin for discarding the white dragons as failed experiments and abandoning them.

Like the other white dragons, Therragorn was created by the Dactyl by modifying the Queen Black Dragon's eggs. Although they were not bound by Jas' curse, the white dragons were deemed too weak and thus failures. Therefore, the Dragonkin abandoned them.

During the God Wars, the white dragons would live solitarily, rarely communicating with one another. This would prove ultimately fatal to them; they were hunted and skinned continually, for white dragonhide creates extremely durable armour for archers. Due to their lack of communication, the remaining dragons discovered the fate of their kin too late, when the race had already been driven to near-extinction. Eventually, Therragorn was the only white dragon remaining.

In despair, she went to Shakorexis, the three-headed King Black Dragon, for help. He agreed to save her, bringing her to a secluded cave beneath old ruins in the north-east of the Wilderness, where she was sealed. Therragorn would remain there for several thousands of years. 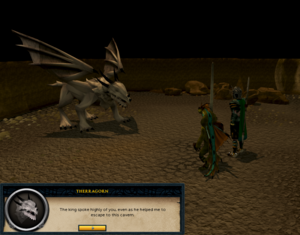 In the first year of the Sixth Age, Shakorexis granted his old rider Hannibus and his human friend access to Therragorn's cave because they were looking for a way to return Hannibus to his homeworld Iaia and had learnt that white dragons were able to travel between dimensions effortlessly. As the two met with Therragorn, she was initially hostile and distrustful, especially towards the human adventurer, but calmed down upon learning of Hannibus' identity, for he was revered by the dragon race.

Therragorn explained that she could bring Hannibus home but would not leave her cave, being the last of her kind. At that moment, three dragon hunters entered the cave, having secretly trailed the adventurer and Hannibus. Their leader expressed desire to kill Therragorn for her skin, and was even more inclined to do so after being informed that she was the last white dragon, stating her hide would be worth even more. The adventurer attacked him and his two cronies, killing the three hunters. Therragorn, however, was furious at her location being exposed and realised she had no choice but to leave her sanctuary and help her visitors.

Hannibus and the adventurer mounted Therragorn as she exited the cave and together they flew to the south. However, dragonfire hit the trio when flying over Daemonheim and Therragorn had to crash-land. She sustained minor injuries, while the grievously wounded Hannibus and his better-off friend, both unconscious, were taken by none other than Kerapac, who brought them to his laboratory underneath the castle.

As Hannibus bonded with Therragorn before they were attacked, she had an idea of where she was going - the Ilujanka homeworld of Iaia, and made her way there. Upon arriving at an Illujankan village, she asked the inhabitants if any of them knew Hannibus. Her calls were answered by Sharrigan, one of Hannibus' descendants.

Meanwhile, the adventurer woke up and was forced to help Kerapac with his research in exchange for Hannibus being healed. Kerapac, seeing a potential benefit for both the Dragonkin and the Ilujanka, offered to attempt a cure for Hannibus' infertility, although he emphasised that such a cure - if even possible - could take a very long time. 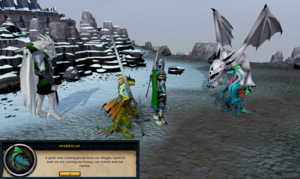 As Hannibus and the adventurer returned to the surface to think, they met with Therragorn and Sharrigan, who were happy to see the two alive. Sharrigan informed her kinsman of the Ilujanka's continued infertility and how they had begun planning the race's extinction. She said they would be honoured if he would return home and be with them, being old and weary himself. Kerapac then arrived, pleasantly surprised that Therragorn had survived the crash, and reminded the Ilujanka of his offer. Therragorn stated that the Dragonkin was an egotistical liar, but that the offer was tempting nonetheless. Hannibus turned to his friend for help, who offered advice, which Hannibus heeded.

This information has been compiled as part of the update history project. Some updates may not be included - see here for how to help out!
Retrieved from ‘https://runescape.wiki/w/Therragorn?oldid=35639959’
Categories:
Hidden categories: