From the RuneScape Wiki, the wiki for all things RuneScape
Jump to: navigation, search
Loading...
Player-owned portWhale's Maw

The Whaler, true name Hubbub, is an adventurer found in the player-owned port, and also on Whale's Maw. He is a former Khan, and pursues a great whale known as Shuma, who destroyed his island. He can be unlocked and give special voyages to the player running the port if the player has 90 Fishing. The Whaler can be unlocked through the tutorial or a special voyage. He can be found upstairs in the bar when he is in port. Upgrading an icon hotspot with the Whale Skull Trophy will increase your chance to attract the Whaler.

Previous storyline cutscenes can be replayed by talking to Hubbub when he is in the port.

Hubbub may first appear in the Tutorial or a special voyage. He arrives at the port with enemies in pursuit. After the player and The Partner help fight them off, Hubbub decides to stay at the port and tells the player to meet him at the bar.

When Hubbub hears that Shuma, the whale who took his leg, has been active around the Bay of Echoes, he asks the player for a ship to confront and kill the whale. The player agrees to help in return for a reward. When the ship returns, another cutscene begins in which The Whaler reveals more about his past. On the voyage he mistook pirates for the deaf whale. He comments that he never made this mistake before. He says his senses once allowed him to be the Khan of a fishing city built on stilts over the sea. Shuma raided the city's fish farms, and so when they learned that she was trapped in a cave, they set out to get revenge. During the fight, the Whaler was not able to kill her, succeeding only in making her deaf. A rock fell on his leg, which he cut off before swimming home. In the meantime, his city was destroyed and now the whaler seeks revenge on Shuma, the great whale who cost him his leg and his island.

Hubbub comes to the player asking for help because Shuma the whale is now attacking the defenceless city of Honazo. Hubbub wants to send a party to kill the monster, but the player decides it would be better to evacuate the city instead. Hubbub calls the player a fool, but has no choice but to agree.

Upon his return, Hubbub tells the player that he senses something is wrong with Shuma. While they are both pledged to destroy one another, they both enjoy the fight. However, Hubbub feels Shuma has lost something, like the taste for revenge Hubbub once enjoyed. Hubbub tells the player that after many years tracking Shuma, he learned that his village was not attacked by Shuma, but rather by a collection of sea creatures led by a man on an albino narwhal. The man, Discord, was a bodyguard for the sea-singer Quin, who uses an ancient horn to summon and control the secrets of the deep. Hubbub tried to destroy Quin, even hiring the Death Lotus assassins, but as a result of this, Quin become more and more protected by creatures and traps, making her unreachable. This is why Hubbub continues to hunt Shuma, even though Shuma is not responsible for the death of his village, he cannot satisfy his thirst for revenge.

The Navigator and Hubbub have been working together to plot the course of Shuma. They have found that she is heading in a straight line directly toward New Heritage, the biggest human city in the Eastern Lands. However, to get there, Shuma must head through the Jade Straits. The player agrees to help stop her by blocking her path. Unfortunately, Hubbub returns to tell the player that nothing they did could prevent Shuma from continuing on.

Part 5: The Old Man of the Sea[edit | edit source]

He wants to visit the only other survivor of his island that survived Shuma, the deaf gigantic whale. The Old Man of the Sea then teaches him how to communicate with sea monsters and the Whaler learns from Shuma that Quin had her chief occultist sacrifice her entire pod for her ritual. Shuma is angry and wishes to destroy humanity, and New Heritage is the Eastern Lands' largest city. The Whaler wants to catch up to Shuma and tell her to focus on Quin and her minions, not innocent people.

The Whaler reports that Shuma is nearing New Heritage. He proposes that crewmen evacuate the city while the Whaler waits on a raft in Shuma's path. He plans to let Shuma eat him. He'll use the few moments before digestion to convince Shuma that Quin is the real enemy, and that Shuma had better turn around and vomit him out. Upon return, Hubbub grants you the victory - you have always put people first, and you have made him a better man. He reports that Shuma is off licking her wounds, and he will visit her to talk about old times and old battles.

Completing this story voyage successfully will reward the player with 100 Spices.

Hubbub's seafaring-based resource voyages are called A Deep-Sea Discovery. They reward the player with chimes and the region's resource or, later in the game, plate, but do not advance the story line. The adversity and reward vary depending on the region. When Hubbub offers more than one special voyage, the player must choose between them.

The descriptions read "The Whaler knows of a chest full of (reward resource or plate) that's sunk to the bottom of the ocean. Help him retrieve it."

Hubbub's experience voyages are called Learning from Fish. They reward the player with Fishing experience, but do not advance the story line. The adversity and reward vary depending on the region. When Hubbub offers more than one special voyage, the player must choose between them.

The description for the 15,000 experience voyage reads "The Whaler believes that there's much to be learned from Carp that Glint, that swim near the shores of Ren Bo, by watching and hunting them. Help the Whaler hone this techniques." (sic)

Hubbub prefers to work with The Biologist or The Exile. When both adventurers are in port, their joint voyages are available in the special voyages list.

Additionally, when all of his, The Assassin and The Occultist's story voyages are complete, trio voyages become available when two of the trio are in port together. The storyline features them working together to defeat and kill Quin. 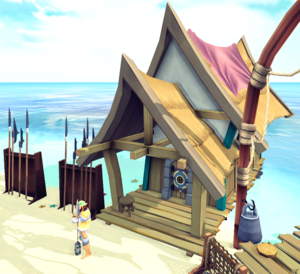 Hubbub's house on the shore of Whale's Maw.

Hubbub can also be found on the south-east part of Whale's Maw by his house, where he can give players with 91+ Fishing contracts.

Transcripts The Whaler speaks in:

Concept art of The Assassin, The Convict, The Missionary, The Occultist, The Biologist, and The Whaler.