From the RuneScape Wiki, the wiki for all things RuneScape
Jump to navigation Jump to search
This article is about the Player Owned Ports NPC. For other uses, see Trader (disambiguation).

The Trader is an old man who is involved in the player-owned port. He will trade excess port resources for trade goods. For example, he may have a stock of 10 Chi at 3125 Cherrywood each. His stock and offer change daily. He will offer either 5 Koi Scales/Pearls, 10 Chi globes/Lacquer/Plate, or 15 Ancient Bones/Spices. He can ask for resources to which you do not yet have access to. According to his concept art, he is also known as the Merchant.

He can be found in the southeastern part of the port near the southwest corner of the lodgings next to the wooden showers.

Contains only 1 of each resource item. Cost to get one trade good.

Contains only 1 of each item.

The trader explains his services

The table below shows the GP equivalent of each port resource when converted to each trade good.

It uses the best gp per trade good item made divided by the number of resources used. For example, ancient bones used to make a tradable scrimshaw of the elements worth 155085 gp per ancient bone takes 4,583 bamboo port resources = 34 gp per bamboo. 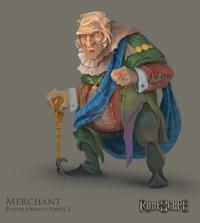 Concept art for the Trader