The Tourist Trap is a quest where the player goes undercover into a slave camp to save an Al Kharidian woman's daughter.

You will have to unequip almost everything several times during this quest, so it is a good idea to leave enough room in your inventory for all weapons and armour, as well as additional quest items. If you make a mistake at certain parts in the quest, you will be trapped and need to have at least 15 free inventory spaces to leave, unless you teleport out and would have to run all the way back. 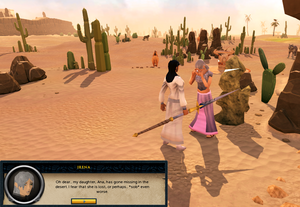 Speaking to Irena at the Shantay Pass.

Begin the quest by talking to Irena immediately south of the Shantay Pass. She is worried about her daughter, Ana, who has not returned from the desert since she set off a few days ago. Offer to help find Ana and return her to her mother.

From the Shantay Pass, go south to find some footprints and follow them until you reach some mercenaries guarding the gate to the Desert Mining Camp (there is a cactus with a red scarf outside, matching how Irena said Ana was wearing one before she disappeared).

To enter the camp, talk to the Mercenary Captain near the gate. You can talk to his Mercenaries and bribe them with 5 coins so they will tell you a bit about the location and give you hints on how to goad him into fighting you alone instead of getting his guards to deal with you, but this is not required. Compliment the captain and agree to do him favours, but when he asks you to kill Al Zaba Bhasim, say that you do not think you can do that, and then insult him for not fighting his own battles. This will start a fight and you must kill him (a ring of recoil kill will suffice). Your character should automatically pick up the metal key, thus granting you access to the camp.

Before you enter, make sure to unequip any armour. This includes shields, amulets, rings, AND weapons. Once you have entered, do not reequip them or you will be caught and thrown in jail. If you are put in jail, you can bend the cell wall window and climb out.

Go into the building to the north and search the table with a bowl on it. You will receive a main gate key (if you lost yours before) and a cell door key, which will save you time if you get caught in the upcoming sections; simply use the cell key on the jail door if this happens. 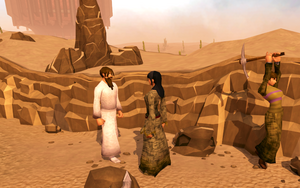 Trading clothes with the Male slave.

Head further north-east into the (mercenary) camp and try to enter the gates that lead to the inner mine, but it is currently inaccessible as you do not look like a slave. Talk to one of the male slaves near the doors and he will tell you that he is planning on making an escape and can do with your help. Agree to remove his handcuffs – you may get caught doing this and thrown in jail. A lockpick makes this part easy, but it is not necessary. Keep trying, and once his handcuffs are off, he will offer to switch his slave robes for your desert robe (keep in mind that only the white desert robe works, not the brown one). While wearing the slave robes, go through the gates.

Upon entering, walk north and follow the cave around until you come to a guarded cave entrance (even if you kill all the guards, you'll still be unable to enter). Talk to one of the guards standing there, and tell him that you'd like to mine in a different area. He will barter you access to the area for a pineapple, specifically a Tenti pineapple, so do not bother bringing a regular one.

Exit the mine and head west to the Bedabin Camp. Al Shabim can be found in the southern large tent, wielding a staff of air. When you talk to him about the pineapple, he agrees to give it to you, though only if you get the plans to a new weapon hidden in a chest back at the mining camp. Agree and he will give you a Bedabin key.

With all your armour and trinkets unequipped, head back east to the mining camp and enter the same building there on the north side. Climb up the ladder to where Captain Siad is sitting, and search the south-western bookcases to learn of his fascination of sailing. Talk to him and select "I wanted to have a chat?". Mention that he has a lot of books, then direct the conversation towards sailing (if you have found the sailing books on his bookshelf). Choose the option "I could tell by the cut of your jib" when presented. He will then drift off into his sailing stories. While he is distracted, open the chest to get the plans.

Faster alternatives include telling him that the slaves escaped or select "Fire! Fire!". He will get distracted and you can get the plans from the chest without Siad noticing, but they only work once before he wises up and throws you in jail, which resets the conversation and you can try again. 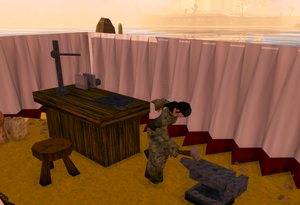 Head back west to the Bedabin Camp and show Al Shabim the plans. If you have the feathers and bronze bars in your inventory, he will give you permission to use an experimental anvil in the tent to the north. Use the bronze bars on the anvil to create some prototype dart tips. Then add the feathers to make a prototype dart. It is possible to fail when smithing the dart tips or attaching the feathers, losing some in the process, so spares may be required. If you forgot the bar or feathers, you can swim over to Tuska's Corpse just west of the camp to bank.

You may fail and lose your bronze bar, so bringing multiple may be beneficial. If you see the notice saying you failed, just don't click continue and then use the bronze bar on the anvil again.

Take this back to Al Shabim and he will give you some bronze darts, along with the tenti pineapple. 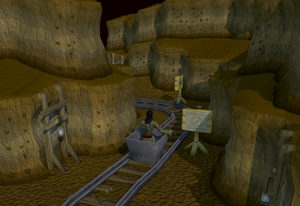 Before re-entering the mining camp, take off your equipment and put on the slave robes. Head back down the mine and hand over the pineapple to the guard. He will now let you inside the mine cave. Walk east into the mine until you find yourself in front of a mine cart. Right-click 'Search barrel' on an empty barrel (be sure you take the barrel with you). Then right-click "Search" the mine cart to ride it to the other side. You can fail and bang your head or knee on the cart and take anywhere from 35 to 485 damage.

If you get thrown into jail before riding the cart, go back and ride the cart. Otherwise you won't be able to put Ana in your barrel later.

Once there, you will see four paths. Go down the second one from the left containing a large number of slaves at the end and you will find Ana in its north-eastern corner. Talk to her and tell her that you are here to help her go back to her mother.

If you tell Ana that the guards are rubbish, you may be thrown into an isolated area where you will need to mine 15 punishment rocks in order to escape, or alternatively you can teleport out and travel back. 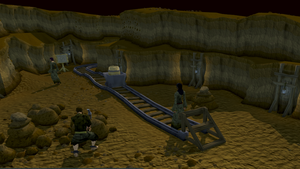 If you drop her any time during the quest before escaping, a guard will notice and you will be thrown into jail and will have to rescue her again.

Put the barrel with Ana into the mine cart which you came from, and send it down the track before getting in yourself and riding down to the other side. Again, search the barrels around the cart until you find Ana in one of them.

Don't walk straight out of that area of the mine holding Ana in your barrel. A guard will compliment you on the heaviness of your barrel, Ana would retort indignantly about her weight and then he will kick your barrel open, revealing Ana and you will have to rescue her again.

Walk north-west to the winch bucket and use the barrel with Ana on it. The guard nearby will help you hoist it up onto the platform. 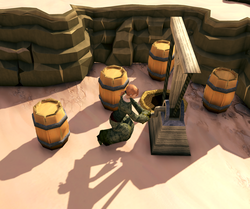 To set Ana on the winch bucket, you have to use the barrel on the winch. Then the guard will ask if you need any help loading the barrel, Select yes, and then Ana will start to complain. When prompted select the speech saying that he was "very gregarious." Once Ana has been sent up through the winch bucket, head back to the surface and go to the winch bucket, in the south-west corner of the Mining Camp. Operate the winch and search the barrel adjacent to it to retrieve Ana. Do not try to walk out the front gate!

You now need to find a way to help Ana escape the mining camp. Talk to the cart driver near the wooden cart in the heart of the camp – he will not talk to you. Place the barrel with Ana into the back of the cart and try again. In order to get out, tell the Mine cart driver the following phrases:

Search the cart after you have finished all of the dialogue to climb into it, then select the "Yes, I'll get on." option to escape out of the camp with Ana. After you get out of the camp, head back to Irena. She will see that you have Ana with you, and both of them will thank you. 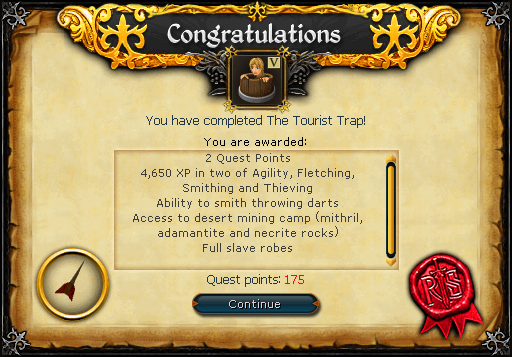 The Tourist Trap is directly required for the following quests/miniquests: