From the RuneScape Wiki, the wiki for all things RuneScape
Jump to navigation Jump to search
"Tengu" redirects here. For the reward, see Tengu tsuba.
The TenguSojobo (contracts)Sojobo? (edit)

The Tengu, true names Sojobo and Shanao (known as Sojobo (contracts) on Waiko), is an adventurer found in a player-owned port. Sojobo is a Tengu mask that the faceless sky orphan Shanao is wearing. Together, they fight injustice throughout the Wushanko Isles.

The Shield region must be focused for the Gift of Gu voyage to appear.

The Tengu shows up at your port and explains that he is Sojobo, Mask of the Ten Gu - a magical mask that is being worn by a Sky Orphan, Shanao. He explains that the two parties are a team and each of them relies on the other. They've joined forces to vanquish all evil in The Eastern Lands and ask to use your fleet.

The Tengu explains that an oni warlord, Obanak, is terrorising the island of Ai Jei, apparently seeking gunpowder for warfare. The Tengu wishes to put a stop to him. After revealing a bit more about how Sojobo came to be in Shanao's possession, they take off. Upon their return, Sojobo reports that the mission was successful and is cause for celebration. The player requests to ask Shanao a question but Sojobo explains that he won't be able answer now as he had passed out from a knock to the head in the fight with the warlord. The Tengu leaves to celebrate at the bar.

The Tengu divulges more of Shanao's history, his reasons for helping Sojobo, and how the two came to meet. Sojobo then relays that Shanao wishes to travel back to his old home on the Teardrop Islands, after hearing that a sky orphan spirit haunted it. Shanao wishes to lay it to rest. The player agrees to the voyage.

On return, The Tengu reports that it was not just one sky orphan spirit as expected but instead there were many of them. He goes on to say that the spirits were angry and it took a great deal of effort to return them to rest. He had gathered from them that they were purposely raised by a malicious entity, but they were unable to say who. Further to this, they heard news that the warlord, Obanak, that was defeated by them was also influenced by an outside party. The Tengu suspects these events are connected - a possible Purist plot.

In order to investigate further, The Tengu suggests that he will have to ask the Purists directly, at their stronghold on Ren Bo. Shanao and Sojobo reminisce about past adventures before setting sail, with a plan for Shanao to fly up to the skies once the boat is close enough in order to catch the purists unaware.

When they are back, The Tengu reports that the purists there gave information without incident, wanting to distance themselves. It is understood that the perpetrator of earlier events was Benkei, a purist whom Sojobo considers to be his nemesis. He had aided Obanak's assault on Ai Jei in exchange for weapons, and he raised the sky orphan spirits so he could discover the location of the sky orphan's most sacred temple. It is thought that Benkei's intentions are to raise an army to oppose the reign of the seasingers within Wushanko. According to Sojobo, this is a cause for concern as there is a relic within the sky orphan temple that would give Benkei the power of the skies. Sojobo and Shanao together vow not to let Benkei desecrate the temple.

Part 5: A Cloud on the Horizon[edit | edit source]

The Tengu comes to ask for passage to the Pearl Fortress so that they could fly up to Haka-su, the sky orphan shrine, which sits on a peak of the mountain overlooking the fortress. It is explained that Haka-su is the final nesting place of the sky orphans and contains their collected knowledge. Additionally, it houses the Fenghuang Feathers, which are said to have been plucked from the great leaders of the sky orphans and are imbued with their power. Even one of these feathers would give Benkei the power of flight and allow him to control the spirits of the sky orphans, and possibly even Shanao. If Benkei succeeded, anarchy could fall over Wushanko in danger to the lives of any non-human. The Tengu pledges to stop Benkei before departing.

The Tengu returns and explains how, on arrival, Benkei was already in flight being carried by a feather. In reaction, Shanao flew straight at him and fought him. After a long battle, the Tengu eventually managed to snatch the feather from Benkei, causing him to fall from a great height. Benkei would most likely have died but in a show of mercy Shanao dived after him and caught him before swooping him to safety. Benkei was shamed by the show of mercy, and swore a life debt to the Tengu. He revealed he had been working for someone else all along - a man named Kakashi. Unfortunately, Kakashi's location was unknown and the rest of the Fenghuang Feathers were missing.

When the Tengu arrives, Sojobo notes that Shanao is resting - he is old, tired and not likely to live much longer. Onto other matters, he reveals that Benkei had been sent back to Kakashi as a spy. The Tengu requires a ship to Yamada Island, from which Kakashi will launch his assault on the island of Paradise and its seasingers. There, they will the right time to strike.

The Tengu explains events on returning: they managed to stop Kakashi's assault on Paradise although he had already killed a number of sea creatures before they'd arrived. Benkei managed to steal back the remaining Fenghuang Feathers and the sky orphan spirits abandoned Kakashi. However, Kakashi escaped and Shanao was too tired to give chase. Benkei is still with Kakashi but may be in a perilous position.

The Tengu prefers to work with The Convict. When both adventurers are in port, their joint voyages are available in the special voyages list.

He can also be found on Waiko, where he hands the player contracts. He can also be summoned to an Uncharted Isle using a Contract contact for the same purpose.

The Tengu speaks in: 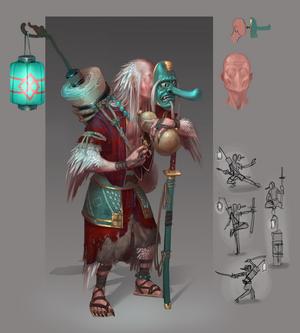 Concept art of The Tengu