From the RuneScape Wiki, the wiki for all things RuneScape
Jump to navigation Jump to search
The Old School RuneScape Wiki also has an article on: osrsw:The Sultan 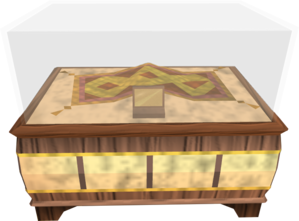 The infamous carpet from 76 on display.

The Sultan, like The Pharaoh and The Emir, is an important figure and ruler in the Kharidian Desert. He is mentioned when speaking to Ali Morrisane after having made a deal with Siamun, as hopefully going to buy clothes.[1] Additionally, the mother of the camel Sandy from Al Kharid used to pull his baggage train.[2] Nothing about the Sultan is known at the moment, apart from the implication that there have been many, as Neite compares her own nobility to theirs.[3]

A predecessor of the current sultan died in the 76th year of the Fifth Age in an unfortunate event known as the The Great Carpet Crash of 76.[4]