From the RuneScape Wiki, the wiki for all things RuneScape
Jump to: navigation, search
The Old School RuneScape Wiki also has an article on: osrsw:The Shaikahan

The Shaikahan is a lionlike creature that prowls the eastern jungle of Karamja (usually south of fairy ring DKP) and is involved in the Tai Bwo Wannai Trio quest, where the player must help Tamayu defeat it. The Shaikahan is immune to normal damage and can only be killed via poison, dreadnips, Summoning familiars, Deflect Curses, or a ring of recoil. These methods are the only way to damage the Shaikahan before and after the quest is complete. It has a unique drop of Shaikahan bones, which give 25 Prayer experience when buried.

NOTE for any players doing the Bury All achievement: the Shaikahan is currently bugged and will not drop bones if the player deals any poison damage to it. In order to kill it and have bones drop, deflect melee, ring of recoil, a deathtouch bracelet, dreadnips, and/or a damaging familiar must be used to kill it. In addition, players who are using a bonecrusher will need to toggle off jogre bones in the bonecrusher's settings in order to receive the bones drop. 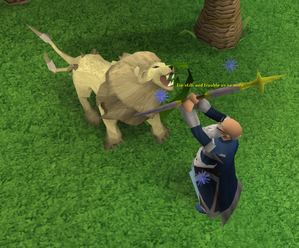